For some time I have been saying that global equity markets are all being led higher by the U.S. Stock markets, namely the NASDAQ. So if the U.S. sneezes, the rest of the world catches a cold.

Furthermore, ever since the U.S. Stock markets both accelerated upwards from August 2017 they have departed even further from sound fundamentals. Therefore, analyzing them from a technical or a chartist’s perspective is key.

So, let’s take a look at the lead up to what appears to be a market top in the U.S. at the end of January and then contemplate the future of these markets in 2018. The first sign of instability occurred in August 2017 when the U.S. markets broke out of their long term trading channels. I will use the NASDAQ index to illustrate my points here, but know that very similar patterns have also occurred on the Dow Jones index. The Dow Jones being representative of the NYSE.

The NASDAQ was already rising in what we call a speed/resistance fan (diverging trend lines), which is considered unstable, and at the point of breaking out its average price to earnings (P/E) ratio was about 30. For Stock markets a P/E ratio range of 10 to 15 is normal and 25 plus is considered to be bubble territory. So to break out from this pattern was both fundamentally and technically pushing it.

But then in January we saw the U.S. Stock markets go even one better and break out from the breakout. This meant we had to zoom in and start monitoring these index charts on a daily basis. It also meant selling down our growth portfolio in anticipation of a major market reversal. You can see the steeper and narrower trend (blue lines) developing on the daily chart of the NASDAQ. 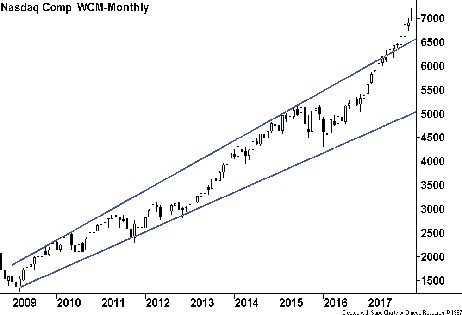 We were now in an exponential trend and any sign of a wobble would be good reason to get out of the way. A wobble being either a sharp drop in the index and/or a rapid increase in volatility. As trends get steeper and steeper, they get narrower and narrower. So a key warning sign is an increase in volatility. And as things played out, we got a good dose of both in the first week of February, as the NASDAQ index collapses down through both its earlier trends. 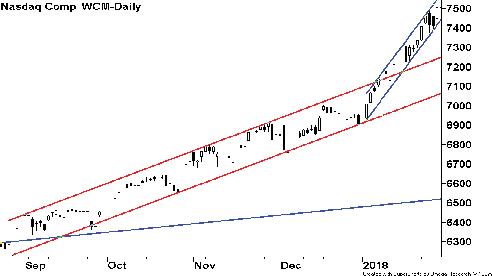 We were now toying with a major reversal and I recommended getting out on the day our market rallied after the U.S. markets retested their medium-term trends (the lower red line in the daily chart of the NASDAQ). This test failed as the indexes didn’t manage to re-enter their trading channels. It was time to go…

So far this narrative brings us to the start of February (the time of writing)…where we are all cashed up and wondering where markets are headed for the rest of 2018. Now we need to go back to the bigger picture to get our bearings. So we return once again to a monthly chart of the NASDAQ which shows the next major support level at 6,600 points (the upper blue line). 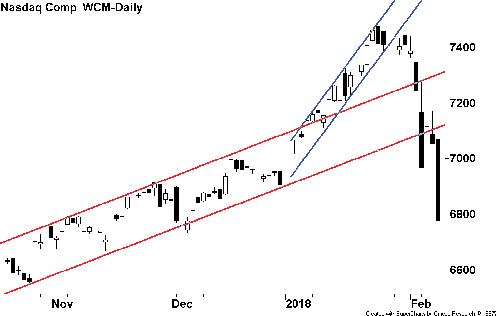 This will most likely be the level at which the NASDAQ rebounds and it may retrace up to 50% of the previous decline. Often referred to as a dead cat bounce. Then I suspect the NASDAQ is likely to fall down through this level, signalling the start of a major down cycle. So on the back of the dead cat bounce, I will start to short sell. The following chart, where I speculated on the future path of the NASDAQ, was originally published in July 2017. I was obviously overly ambitious with a peak at 8,500 points… 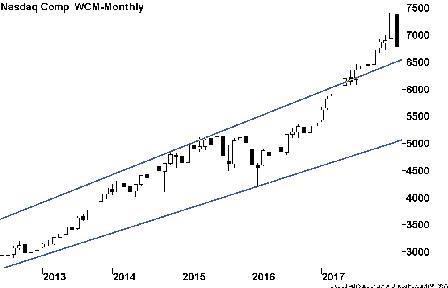 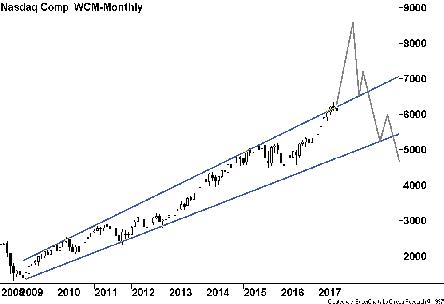 My outlook for 2018 is not a rosy one. I believe global equity markets led by the U.S., are in the process of reversing. The down cycle we are about to embark upon will be significant and it is not one that I am willing to ride out with my growth portfolio. On the other hand, I will continue to hold my income stocks and look forward to adding to them. When the time is right.