An Introduction to Collaborative Robots

When talking with many companies around the world we find a couple of common operational concerns right now. Firstly, how do they secure an adequate supply of high- quality labour and secondly the need to improve production or manufacturing processes to remain competitive, or more importantly, give them a competitive advantage. From packaging to food to logistics, companies are having a difficult time in hiring an adequate supply of high-quality employees. When you couple this with production utilization rates running at over 90% in many industries, there is an accelerating demand for automation, and specifically in the form of robots.

Historically, robots were housed in large cages to protect human employees who may be working in the vicinity of the robot. This limited the types, location or number of applications that could be performed by these very large installations. However, over the past few years, we have seen the introduction of collaborative robotics or cobots. When you compare them to the typical industrial robot you will see they are smaller, lower cost, easier to set up and program while safely working side by side with humans in a manufacturing or production setting. These cobots are currently used for repetitive tasks such as assembly, packaging or polishing in a broad set of industries including automotive, food processing, machining and pharmaceuticals, just to name a few.

How safe are they actually? The cobot industry is taking two basic approaches to ensure safe side by side operation in production settings. Firstly, by utilizing modern sensors, the cobot will immediately stop, if it makes contact with a human co-worker, and the heavier the cobot application, the slower it will move to ensure safe movement. Secondly, if the cobot and human co-worker are handing parts back and forth, the grippers are designed to be incapable of causing injury to the human co-worker.

But what about the job implications? There is a concern that these cobots will replace human workers, however, the early case studies are showing significant productivity benefits as they assist, rather than replace their human counterparts. The World Economic Forum estimates that:

“Nearly 50% of companies expect that automation will lead to some reduction in their full-time workforce by 2022, based on the job profiles of their employee base today. However, 38% of businesses surveyed expect to extend their workforce to new productivity-enhancing roles, and more than a quarter expect automation to lead to the creation of new roles in their enterprise.”

As cobots are employed for repetitive tasks, humans will be freed up to concentrate on more creative and high-value tasks. At the most basic level, tools such as cobots currently don’t take people’s jobs, they merely enhance productivity and make the job easier. Think of a carpenter’s productivity improvement once the power saw replaced the handsaw – this is what you call a productivity step change.

We are hearing anecdotal evidence of 40-50% productivity improvements with 40% increases in shipping accuracy just in the logistics space alone. Payback periods can be as short as 6-9 months as businesses deploy robots into daily production operations.

Let’s look at a couple of real-world examples:

Continental Automotive Spain, emphasizes that one of the main challenges of the automotive component industry is to improve productivity given that the company operates within a very competitive sector. In 2016, the company decided to acquire cobots to automate the manufacture and handling of PCB boards, bringing down changeover times by 50%, from 40 to 20 minutes when compared to performing the task manually.

Cobots help Food Company Orkla Foods in Sweden streamline production and create operational stability in the packing of food in cartons. It proved very easy to implement and easy to teach the employees to handle and operate the robot. It works well in various networks of production machines, is easy to move and requires no extensive safety installations.

"An important advantage is that the robot stops if you bump into it, meaning that it is safe and does not require any safety guarding around it which makes it more integrated with the employees."

The company indicated that the payback time on the investment was about six months.

At the other end of the spectrum, the value of repeatability, accuracy, and speed is also evident in a project underway at NASA's Langley Research Center. To speed up and improve the inspection of aircraft composite structures, cobots are used to create an inspection pattern that doesn't miss any areas.

These strong use cases are driving broad global adoption. According to the International Federation of Robotics (IFR), strong growth in the electronics and automotive industries is driving accelerating adoption trends. This demand is likely to become more widespread over the next few years as the ongoing trend to automate and continued technological improvements increase adoption rates and potential use cases across many industries. From 2018 to 2020, the IFR estimates that global robot installations will increase at a 15% compound rate with more than 1.7m new robots being installed over this time period. 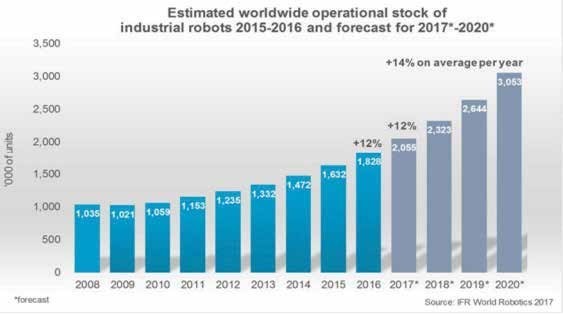 One of the leaders in the robot space is Teradyne which is a global mid-small-cap company based just outside of Boston Massachusetts. Teradyne entered the collaborative robot industry with its purchase of Universal Robots (UR) in May 2015 for total consideration including earn-outs of $350m. All of the use cases highlighted earlier are using UR cobots and services.

UR was and still is the leader in the global cobot industry having shipped more cobots than all other cobot competitors combined at the time of the acquisition. It currently has a very high market share which we estimate around 60% and given this strong market position, it is seeing third party developers innovating with new applications on its platform. These new capabilities include 3D vision modules (enhanced vision), integrated force/torque sensing (sense of touch) and several end of arm accessories which dramatically increases use cases and competitive moat for its cobot fleet.

The UR business has grown dramatically over the past couple of years with revenues of $42m in the year of purchase growing to >$170m in 2017, while profitability has increased fivefold in the same period. Management has recently purchased MiR which provides autonomous mobile robots which move material between workstations or to and from storage locations as well as Energid which develops motion control software which helps “train” robots to complete tasks.

These businesses are combined within its Industrial Automation segment and Teradyne expects this division to grow revenues at a 50-55% compound growth rate out to 2021 to just under $1bn.

As the global manufacturing and production industries continue to deal with tight labour and highly competitive operating conditions, companies such as Teradyne, which solve these large problems, will benefit and deliver robust growth well into the future.