Bitcoin – its not a currency, its not an asset; its just something to speculate on

Interest in Bitcoin and other crypto currencies has surged since late last year after Bitcoin burst above its previous 2017 record high and was then pushed sharply higher helped along by supportive comments from Elon Musk in February. But it’s also had a sharp fall back recently.

The chart below shows Bitcoin’s price relative to the US dollar since 2010, both on a regular scale where it has gone exponential and on a log scale to show some perspective. 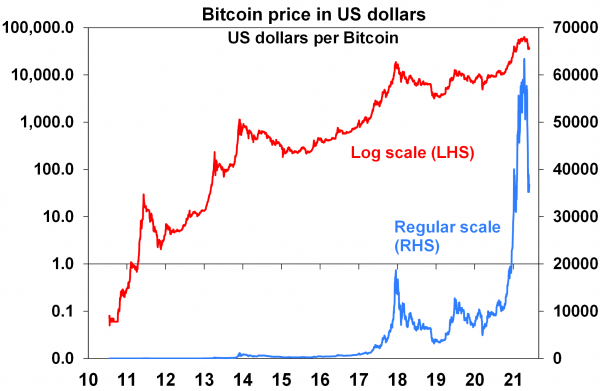 Bitcoin to the moon

Digital or crypto currencies, led by Bitcoin, and their blockchain technology seem to hold much promise. Trying to explain it is also very complicated…but here it goes! The blockchain basically means that transactions in Bitcoin are verified and recorded in a public ledger (which is the blockchain) by a network of nodes (or databases) on the internet.

New Bitcoins are created as a reward for an intensive computational record keeping process called mining, that groups new transactions into a block which is added to the chain. The supply of Bitcoins is limited to 21 million, and half of the supply was mined in the first four years of Bitcoin but because of a process called bitcoin halving which sees miners compensated by less and less Bitcoins over time the limit will only be reached around 2140 after which transactions fees will be the only reward for record keeping.

This sounds complicated as it is. Because each node stores its own copy, there is no need for a trusted central authority like a central bank. Bitcoin is also anonymous with funds just tied to Bitcoin addresses which require a private key to access.

Because of Bitcoin’s limited supply and independence from government and central banks, it’s seen as a hedge against inflation and the debasement of paper currencies that some fear from quantitative easing.

As with many things tech, the more that use it, the greater its appeal and so news that: PayPal will let customers buy, hold or sell Bitcoin on its platform; various institutions are looking into it; and that Tesla had put $US1.5 billion into it and will accept it as payment boosted hopes that it will attain general acceptance as a currency. Of course, Tesla’s subsequent announcement that it won’t accept payment using Bitcoin has now questioned that.

Reason to be sceptical

An alternative view is that it’s just another bubble and should not be taken seriously. There are numerous grounds for caution.

First, is not suitable for everyday transactions as digital cash:

All of these things suggest that Bitcoin has limited value as a currency. And we can now do digital transactions instantaneously and cheaply with the tap of a phone so why bother with all the issues around Bitcoin?

Second, Bitcoin has had issues with theft and hacking whereas use of a bank can provide protection of your savings.

Third, it’s bad for the environment, and this was well known before Elon Musk raised it. The amount of energy needed by computers to mine Bitcoin is rising and its annual electricity consumption is equal to that of countries like Sweden, Argentina and Pakistan. A single Bitcoin transaction consumes as much energy as 500,000 Visa transactions. 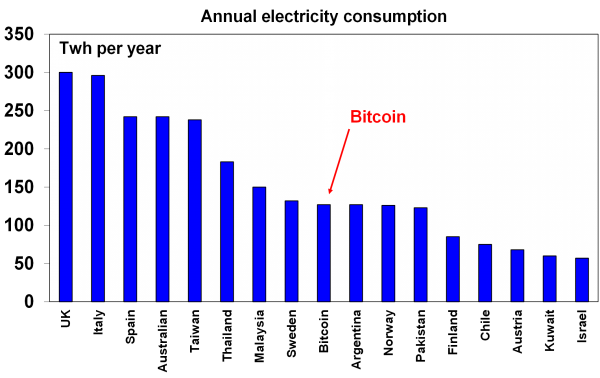 Fourth, while digital money based on blockchain/public ledger technology may be the way of the future, this does not mean it will be with Bitcoin. There are nearly now several thousand of them.

Fifth, Bitcoin and other crypto currencies face numerous threats from governments. In particular:

Finally, Bitcoin is not a capital asset and so does not generate cash flow in order to be able to value it. Unlike most commodities, it is not used to make things for economic use. And unlike gold (of which around 45% is in jewellery) it does not have an alternative use to resort to. This makes it impossible to put a price on what it’s worth.

So, what is it and why has it gone up exponentially?

If Bitcoin is not really digital cash and it’s not a capital asset suitable for investment, it begs the question as to what it really is? The short answer is that it’s something to speculate on. Bitcoin has all the hallmarks of a classic bubble: a positive fundamental development in terms of a claimed high-tech replacement for paper currency; self-reinforcing price gains that are being accentuated by social media hype; all convincing enthusiasts that the only way is up. The vulnerability of Bitcoin and other crypto currencies to tweets from digital gurus attests to their speculative nature.

It’s basically a vehicle for enthusiasts to buy hope that more and more people will buy into to keep Bitcoin going to the moon. Which really makes it akin to a big Ponzi scheme.

Bitcoin could go up for a long way yet as more investors are sucked in on the belief that they are on the way to unlimited riches. But just as the crowd can push something to euphoric extremes it can also drive it to collapse.

What does this mean for investors?

First, it’s hard to work out where to put Bitcoin and other cryptos in an investment portfolio. It’s far too volatile to be considered a defensive asset. It’s impossible to assess as a growth asset in order to get any reasonable idea as to what it may return.

Second, one big lesson from the Global Financial Crisis is that if you don’t understand something, you shouldn’t invest in it. Bitcoin is anything but easy to understand.

Third, just because Bitcoin has gone up and may rise a whole lot further does not prove its story. All it tells us is that people have been buying it.

Simply want tto say your article is as amazing.