Do We Hang Up on Telstra?

By Andrew Lewandowski
Posted on 15 September 2018 — 20:56pm in Technology, Telecommunications

Telstra has been a core portfolio holding for many investors after being privatized at $3.30 per share in 1997. Today the stock is trading at $2.73, well below its initial public offering price 21 years ago. The difficult performance of Telstra since its listing is because its dominant market position has gradually been eroded by the natural forces of competition and technological change.

In this note, we highlight the risks around Telstra’s earnings and dividend from a further decay in Telstra’s core business of mobile phone subscriptions. Our research suggests investors should be prepared for lower future earnings from Telstra and a substantial cut in the dividend and potentially a much lower Telstra ‘dividend yield’.

The impact of the NBN on Telstra’s profitability is well understood as data moves from Telstra’s copper wires to the government’s fibre optic network. What is less appreciated is the decline in Telstra’s mobile earnings now underway (mobile earnings represent 50% of TLS’ operating profit). Perhaps this is not surprising, as even Telstra has been late to acknowledge the deterioration in mobile profitability. Telstra was still targeting mobile earnings growth as recently as May 2018…

Telstra has a dominant market share in Australia’s mobile sector, with almost 50% of post-paid mobile accounts and circa 60% of mobile industry profits (EBITDA). Optus is the other major player with a 30% market share, with Vodafone at 20%.

Telstra’s mobile pricing is too high

Telstra’s mobile pricing is now 30% above Optus. We believe the combination of Telstra’s dominant market share and materially higher mobile prices have left Telstra vulnerable to intensifying mobile competition from the existing players, as well as new entrants such as TPG Telecom (TPM). 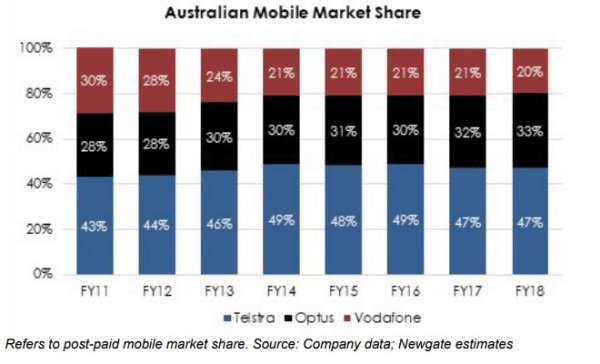 Who is leading the charge on mobile competition?

We see Optus as the key source of competitive pressure on Telstra’s mobile business. After substantial investment in recent years, Optus is now widely regarded as having comparable mobile network quality to Telstra, which is substantiated by a recent independent study ranking Optus as Australia’s top mobile network.

Telstra mobile pricing premium to Optus has continued to rise… 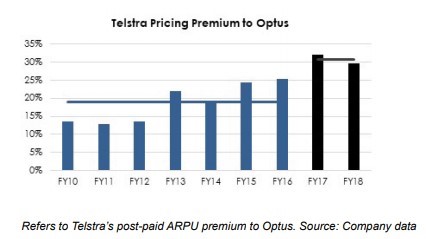 Despite Optus closing the gap on network quality, Telstra’s pricing premium has expanded in recent years. We calculate Telstra charge an average premium of 30% above Optus, up from an average 20% premium over 2010-16.

Optus has capitalized on its significant mobile phone price discount to drive market-leading mobile customer growth over the last two years. This has caused Optus’ market share to increase by +2.1% since 2016, while Telstra’s market share has declined -1%.

Telstra competitive response is not enough

We believe intensifying competition in the face of Telstra’s high pricing premiums has created pressure for Telstra to cut mobile prices to preserve its customer base. We are starting to see this unfold, with Telstra announcing at its June Investor Day that it will release lower-priced mobile plans from July 2018. 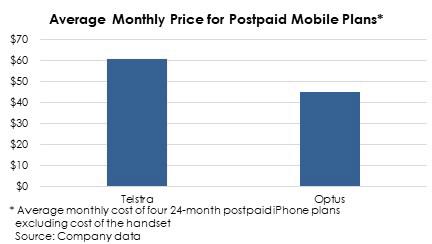 TLS’ planned price cuts are unlikely to mitigate market share loss, with Optus cutting prices even more aggressively since May. As a result, Telstra’s premium to Optus’ iPhone plans have now widened to 35%.

What is Optus trying to achieve by aggressively chasing market share?

Optus is the second-largest mobile phone player but has a market share significantly lower than Telstra. Their best strategy is to remain aggressive on price to produce material growth in customer numbers, grow market share and leverage the significant investment they have made in improving their network quality. This appears to be what they are doing. Our work on the US mobile industry suggests Optus could be pursuing a similar strategy to challenger network T-Mobile in the USA.

In 2014, T-Mobile was the number four mobile competitor in the USA. It priced its mobile offering ~20% below its competitors. In just four years T Mobile delivered customer growth of 11% per annum, versus peers at just 2% per annum. T Mobile’s operating profits almost doubled over the same period.

If we factor in Telstra cutting its mobile phone charges by 20% over the next three years, we estimate a 30% decline in free cash flow over this same time period.

This would see free cash flow per share decline from 20 cents to 14 cents per share, and the dividend declining to circa 12 cents per share. If we assume that Telstra trades on a 6% fully franked yield then it would trade at approximately $2.00 per share, representing 25% downside from current levels. We expect to see continued downside pressure to Telstra’s share price over the 12 months ahead.