The Australian ‘Long Day Care Centre’ market is estimated to be worth $17.0Bn with over 7,700 centers growing at an average of 3.4% per annum for the past 5 years.

Demographic and socio-economic changes continue to drive the demand for early learning accommodation.

Early leaning is now seen as both a mechanism to support labor force participation (particularly driven by the increase in female workforce participation) and an important form of child development and education.

Research shows quality education and care early in life leads to better health, higher education and employment outcomes later in life. As a result, more children are being enrolled in, and spending more time, at early learning centers. They are also being enrolled at an earlier age which is creating increased participation and demand.

Child occupancy rates for quality centers range from 70% to 100% (children to licensed places), with individual center demand specific to both demographic and socio-economic factors. It is common in many areas of Australia (both rural and metropolitan) for parents to experience lengthy waiting periods with sought after centers operating at 100% occupancy.

Analysis of center demand and supply indicates an equilibrium with ~ 60% of new centers located in areas where the child to place ratio sits above 1:3 (considered supply/demand equilibrium). However, pockets of under-supply and over-supply are naturally evident, and this fluctuates over time.

In response to demographic and socio-economic growth, the introduction of the National Quality Standards (NQS) and increased Government support through child-care subsidies, the Australian early learning sector has grown from a small, fragmented ‘cottage industry’, into a mature industry with operators running portfolios of centers with formalized early learning programs. 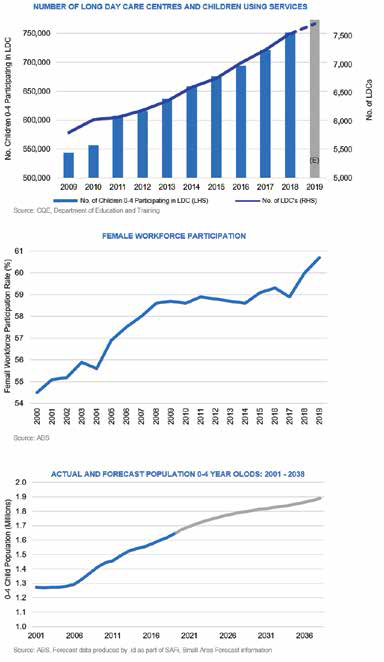 Since 2013 the number of children using Long Day Care Services in Australia has grown by 17.8% to 750,000. The average time a child spends in long day care has also grown to 31 hours per week.

Participation of 0-4-year-olds has increased over the past 5 years with further increases anticipated in VIC, NSW and WA with State Government funding support allocated.

To improve quality and delivery of early learning in Australia, the Government developed the NQS framework and the Early Years Learning Framework by which all early education providers are audited against and results made public. Significant quality improvements have been seen in the sector with the design and layout of centers becoming highly specialized and the delivery of educational outcomes increasingly valued by families.

Government Support of the Sector

Access to affordable early learning is an important issue for most Australian families. Without Government financial assistance, many families would find the cost of child care prohibitive. In almost half of OECD countries, 90% or more of total early learning expenditure comes from the Government. Australian Government funding is below this.

Australian Government funding to the sector has improved over the past decade with the Productivity Commission reporting funding growth of 30% from 2013 to 2018, this has been from a relatively low base.

In July 2018, the Government implemented the $37Bn ‘Jobs for Families Package’, providing families with a long-needed increase in funding assistance. Government funding is now linked to demand and is activity means tested to parents working/study hours. It is estimated that 94% of families are now better off with less out of pocket expenses from child care9. The new Government child care subsidy has effectively improved the affordability of childcare by 11% which is reflected in improved center occupancy figures.

In addition, both the Victorian and New South Wales State Governments have initiated funding packages over the next 5 years to specifically target increased educational participation of 3 and 4-year-old children. 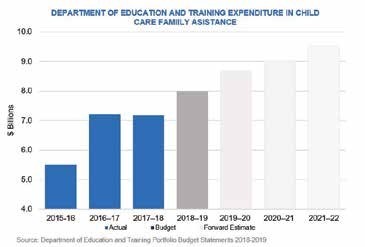 Why Investment in The Early Learning Sector Is Attractive

Early learning is an attractive real estate investment given:

•   Secure lease structures with a combination of:

•   triple-net structure providing that all capital expenditure and refurbishments are paid for by the tenant; and

•   inflation protection given annual rental increases are typically linked to CPI or a higher rate;

•   Government backing of the sector;

•   Centers are typically specialized assets with new centers being high-quality purpose-built assets. Tenants are inherently linked to their premises due to the specialized nature and capital invested by them in fit-outs.

•   Increasing demand for early learning; and