In this article, we examine whether there is any validity to the assumptions that underlie the terms ‘growth’ and ‘value’. We find these assumptions wanting.

The finance industry loves labels: Nifty-Fifty, TMT, BRICS, FANGS, Next Eleven and Fragile Five to name a few. They become an accepted part of financial market nomenclature for a period, then most disappear from the conversation, a bit like the Atkins Diet, and eventually become quaint markers in time that help to define an era.

The terms ‘growth’ and ‘value’, however, have had more staying power and are used extensively in financial market commentary. Frequently we read that ‘growth is outperforming value’, a particular investment firm is a ‘value manager’, or a certain company is a ‘growth stock’. These terms are used in ways that suggest you can divide stocks and investors into two opposing tribes, like Democrats and Republicans or the Montagues and the Capulets. These distinctions are nonsense. They are helpful neither in understanding the character of particular investments, nor the character of specific investment managers.

The first reason these labels lack genuine meaning is the absence of a universally-accepted definition. Let’s jump over this hurdle by picking one. Standard & Poor’s (S&P) creates indexes that quantitatively select stocks based on specific characteristics or ‘factors’. Its factor indexes define growth and value each based on three variables:

With the benefit of a definition, let’s now look at the significant shortcomings of each label.

The notion of a ‘growth company’ and hence a ‘growth investor’ seems obvious. Surely it’s as easy as picking the businesses that will generate faster than average EPS growth. We find that it’s not that simple.

The S&P US Growth Index is designed to capture those stocks whose earnings are expected to grow at an above-average rate. Let’s look at whether the three growth variables do indeed correlate with future earnings growth.

The relationship between actual sales per share growth and future earnings per share (EPS) growth is not linear. In fact, there isn’t one. To explore this, we took the 733 US companies that have a market capitalization greater than US$5b and more than seven year’s history as a listed company. We divided them into five groups ranked by annualized sales growth over 2011 to 2014 and looked at the EPS growth over the following three years.

There is no relationship between past sales growth and future earnings growth. 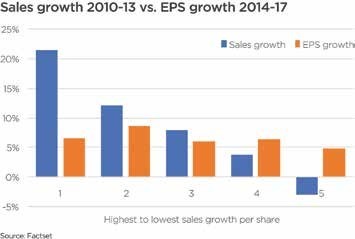 The absence of any correlation is clear. Historic sales growth (in the blue bars) tells us nothing about future earnings growth (in orange). Interestingly, and perhaps counterintuitively, the companies that had grown sales per share in the fastest tier, with a median growth of 21.4%, generated EPS growth at a rate materially below tier 2, whose sales growth was about half as fast. Median earnings growth barely differed between sales growth in quintiles 1, 3 and 4. Moreover, comparing the fastest and slowest growing quintiles, three-year annualized sales growth differed by almost 25% p.a., yet this translated to a difference in EPS growth of just 1.7% p.a.

Rapidly expanding businesses often run into trouble. The graph below shows that of the group of companies with the fastest sales growth over three years to 2016, one in ten of them generated a loss in the following year, far higher than the middle three groups of ‘moderate growers’. 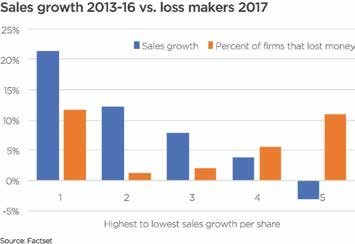 If historic sales growth is no help as a predictor of future EPS growth, then perhaps historic EPS growth will do a better job.

Past growth in EPS is of no help in predicting future growth. 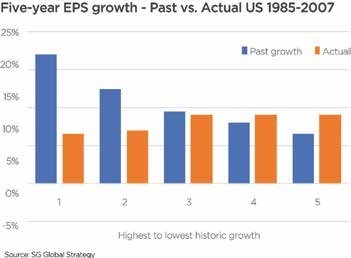 Louis Chan from the University of Illinois looked at past and future growth in US companies over 1951 to 1998 (‘The Level and Persistence of Growth Rates’, The Journal of Finance, April 2003). He found that firms with superior EPS growth over three and five years did not show persistence into the following periods. So, as tempting as it may be to rely on it, historic EPS growth does not help identify companies with above-average future earnings growth.

If past growth can’t quantitatively identify fast-growers, can analyst judgement do better? After all, most people would consider stock analysts to be experts in the companies they cover and financial forecasts to be central to their job. Sadly, sell-side analysts in general have no ability to distinguish fast-growers from the rest. Companies expected to grow EPS in the highest bracket generate growth that is, on average, different from those expected to grow at the slowest rate.

Analysts are, on average, unable to distinguish future fast-growers from the rest. 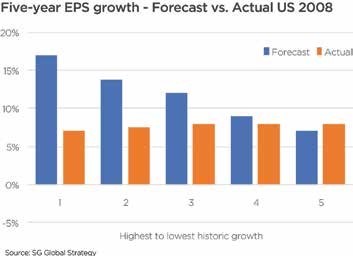 The notion of ‘growth companies’ and in turn ‘growth investors’ has little to support it. As much as some might like to think that businesses that will generate high rates of EPS growth in the medium-term are easily identified, the evidence demonstrates that this is not the case. Above-average rates of achieved sales growth or EPS growth do not translate to above-average future EPS growth. Stock analysts show no ability in general to identify those businesses that will generate superior EPS growth.

Value seems a straightforward concept. Surely a cheap stock is one trading on a low multiple. Again, we show that this mental shortcut does not withstand scrutiny.

The S&P US Value Index is designed to identify ‘cheap’ companies. Let’s see if the three measures it uses can be expected to achieve that.

Shareholders’ equity, or book value, is an accounting residual, meaning it is the balancing item after assets and liabilities have been added up. A write-off of goodwill, for instance, will result in an equal reduction to book value and artificially increase the price-to-book ratio. Likewise, an increase in the discount rate used to calculate future pension obligations will result in an increase in book value. Book value per share is easily distorted and has no relationship to the value of a business.

The ratio of price-to-forecast earnings seems a sensible way of separating cheap from expensive companies. However, it is deficient. Firstly, analysts, in general, cannot accurately forecast earnings, even one year hence. Further, analysts are systematically grossly optimistic – forecast growth is, on average, 50% higher than actual growth. So, a valuation ratio with forecast earnings in the denominator is flawed. Furthermore, the value of a business is a function of the cash it generates that is available to owners, not its accounting earnings. The difference between the two can be sizeable. Price-to-accounting earnings is a far less useful measure of value than price-to-normalized free cash available to shareholders.

If it’s cash that matters, then perhaps this ratio will do the job. Enterprise value or the sum of market capitalization and net debt, relative to cash flow from operations is conceptually appealing. However, when applied mechanically using data drawn directly from financial statements it has considerable limitations. The reason for this is the denominator.

Cash flow from operating activities (CFO) is defined as:

Thus ‘cash flow from operations’ produces a number that contains non-sensual add-backs, can vary wildly year to year, and deviate significantly from a business’s economic reality, severely limiting its usefulness as a valuation tool.

All three of these ‘Value’ measures capture whether a stock trades on a high or low multiple relative to the market average. What these measures do not capture is where a stock trades relative to where it should trade; in other words, relative to its inherent worth. Designating stocks on below-average multiples as cheap, or ‘value’, and above-average multiples as expensive makes an implicit assumption that all stocks should trade on the same multiple. Knowing the price of one house relative to the price of another house tells you nothing – they might be of different size, different condition, perhaps even in different cities or countries. Knowing size, condition, location and so on, one can start to form a view of what they are worth. The most ‘expensive’ house may, in fact, be the cheapest, relative to its value. A low multiple does not mean a cheap stock.

We don’t believe in categorizing stocks as growth or value. We believe in the growth in value.

‘Growth’ and ‘value’ are terms used with abandon, but they are terms without real meaning. ‘Growth’ implies an ability to identify businesses growing EPS faster than an average that does not exist, either objectively or subjectively. ‘Value’ implies that simple accounting ratios can mechanically rank-order stocks from cheap to expensive relative to their inherent worth. They cannot. To underscore the absence of real meaning and distinction in the terms ‘growth’ and ‘value’, as popularly applied, the S&P US Growth Index and the S&P US Value Index share the same largest holding – Apple.

We don’t believe in the artificial distinction of growth or value. What we do believe in is growth in value. Growth in value occurs through companies earning superior returns on invested capital. We look to own those select businesses that become more valuable over time, where we can own them at less than today’s value and where we judge the risk of disappointment to be low.