Hybrids: deserving of a place in a balanced portfolio?

Due to their attractive franked income returns, usually relatively low capital volatility, and ready availability through the Australian Securities Exchange (ASX), hybrid securities have been a popular choice with Australian retail investors over recent years.

As this article will demonstrate, hybrid securities are best considered a distinct investment class in their own right as they blend both bond and equity characteristics to varying degrees. As such they have a unique and valid place along the risk-return spectrum of investment choices available to investors.

That said, due to their inherent complexity and the general inefficiency of the market in which they trade, we believe a strong case can also be made for gaining exposure to hybrids securities through a diversified and professionally run managed fund.

Hybrid securities are neither traditional bond investments nor equities. As the name implies, they share the risk and return features of both to varying degrees, depending on the specific terms and conditions attached to the hybrid security in question. As such, and as evident in the diagram below, hybrids can be expected to produce risk and return characteristics above those of traditional fixed-income securities like bonds but below those of ordinary shares. 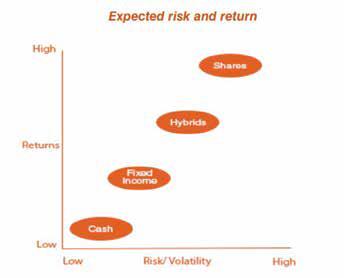 Compared to traditional bonds, for example, hybrids usually offer less security of regular income returns, less certainty of when capital will be returned, and greater “credit” risk given they rank only above shareholders in the capital structure. Indeed, particularly with regard to hybrids issued by Australia’s banks, investors face some risk of full or partial capital loss in the (unlikely) event that a major bank suffered severe financial difficulty.

In exchange for these particular characteristics, however, hybrids securities have been able to offer attractive income returns for usually only moderate levels of credit risk or return volatility. Note hybrid income returns also include franking credits which are not available via bond and cash investments.

As at end-June 2018, for example, the gross running yield on the BetaShares Active Australian Hybrids Fund (managed fund) (ASX Code: HBRD) was 5.4% p.a., compared with 3.8% p.a. for the Bloomberg AusBond Composite Index, which is the most commonly used bond benchmark for local fund managers and Australian Bond ETFs. The Bloomberg AusBond Credit Index (comprising mainly corporate bonds) had a running yield of 4.1% p.a. 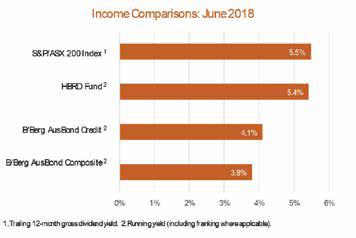 Source: Bloomberg, BetaShares. Past performance is not an indicator of future performance. You cannot invest directly in an index. The benefit of franking credits will vary depending on an investor’s tax situation.

HBRD’s prospective income return as at end-June was also broadly comparable with that of the Australian equity market, with the gross dividend yield for the S&P/ASX 200 Index at that time running at 5.5% p.a.

As seen in the chart below, while hybrid valuations did experience a decline during the GFC-induced panic regarding bank solvency, these declines were still much less than that for bank shares and losses were recovered relatively more quickly. What’s more, hybrid values were hardly affected during the more recent period of bank share price weakness. This suggests that during normal periods of share market volatility – when the ultimate solvency of major hybrid issuers such as banks is not seriously in question – the volatility of hybrids returns might be expected to be relatively low, even approaching that of traditional bonds higher up the capital structure. 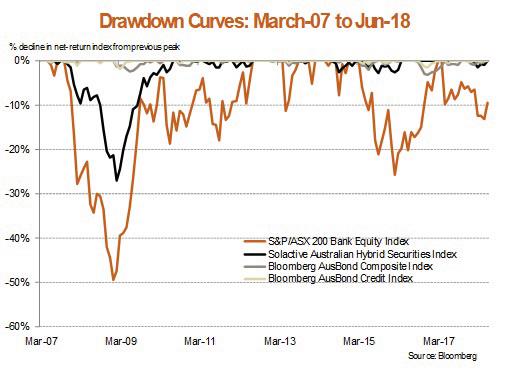 Past performance is not an indicator of future performance. You cannot invest directly in an index.

What’s more, one feature of hybrids that should help mitigate return volatility over time – especially compared to traditional fixed-rate government and corporate bonds – is that their interest rates tend to be floating, or adjust to the general level of interest rates over time. Due to this feature, the price or capital value of hybrids tends to be much less sensitive over time to changes in the general level of interest rates than is the case for fixed-rate bonds. This is particularly noteworthy in the present climate (at the time of writing), given interest rates globally remain quite low but are generally expected to start rising over the next year or so.

The case for active hybrid management

Although they offer the potential for attractive income returns, hybrids are complex securities which can differ greatly in terms of their bond and equity characteristics - and hence their ultimate risk to investors.

Failure to properly understand each hybrid security’s specific terms and conditions can result in some investors taking on unintended risks, or at least potentially forgoing better returns available on other hybrids with similar risk. In addition, the relative inefficiency and make-up of the hybrids market allows experts to potentially take regular advantage of mispricing.

Compared to the share market, moreover, the hybrids market is relatively illiquid. As seen in the chart below, for example, the bid-offer spreads (i.e. the difference between the market price at which hybrids are able to be bought and sold) for Commonwealth Bank hybrid securities tend to be notably higher than that for its shares. What’s more, these spreads can vary greatly on a day-to-day basis – suggesting they can be highly influenced by the number of buyers and sellers on any given day. While it’s possible for retail investors to get into and out of hybrids securities on the exchange, it can often come at a cost! 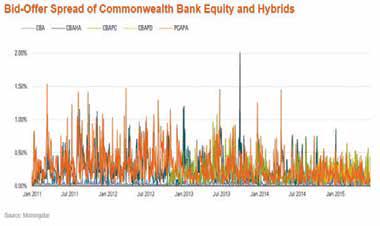 While retail investors are reliant on making trades through the exchange, moreover, professional fund managers can additionally source other hybrids opportunities - and often deeper liquidity - through direct trades with other financial institutions in over-the-counter (“OTC”) transactions.

All up, given the complexity of hybrid securities, the relative inefficiency of the hybrids market and associated opportunity to take advantage of mispricing, and generally lower levels of exchange liquidity, we believe there are advantages in gaining exposure to these investments through a diversified, professionally run managed fund.