In a World Searching for Growth, Asia Shines

The long-term outlook for Asia is positive, but in the short-term there is likely to be some volatility. The trade dispute is widely expected to last well into next year.

Concerns of a slowing global economy center on weak Chinese data and will dampen investor sentiment. Ongoing political unrest in Hong Kong doesn’t seem to be fading despite a withdrawal of the extradition bill, which triggered these protests.

However, prudent macroeconomic and fiscal policies will help economies across the region to respond to the headwinds, ensuring that growth remains robust. In China, we expect economic growth to moderate, given a challenging environment owing to lingering trade tensions. Chinese policymakers remain committed to stimulating domestic demand and loosening financial conditions to cushion short-term headwinds. Additionally, growth in India is likely to be driven by increased public spending, a higher capacity utilization rate, tax cuts and an uptick in private investment.

Looking ahead, there’s been increasing talk of a global recession, however we don’t see an imminent risk of such an event. One of the main positive drivers is the dramatic easing of global monetary conditions. After tightening last year, developed market yields have plunged by a similar magnitude to 2007-2009. The Fed is again buying bonds and cutting rates more than it anticipated, the European Central bank launched a broad-based easing programmer, and the Bank of Japan has retained its ultra-easy monetary policy setting. In addition, almost every major Emerging Market central bank has cut interest rates, many after a painful tightening last year. This is a potent mix that will likely support the global economy going into 2020. If we are right, then a recovery in global growth combined with a search for higher returns is likely to support risk assets, including Asian equities.

Why have Asian equities underperformed despite strong macroeconomic trends?

In a world searching for growth, structural and cyclical forces are combining to highlight the attractiveness of Asia as a destination for investment. China has been the undoubted star of the region given its sheer size and growth trajectory, while other parts of Asia have registered equally impressive gains. The International Monetary Fund (IMF) estimates that emerging and developing Asia is around one third of global gross domestic product (GDP) today, making the region over twice the size of the United States. By 2023, it is estimated that the economies of emerging and developing Asia will be larger than all the advanced economies combined.

Of course, strong economic growth does not necessarily equate to better investment outcomes. The escalation of trade barriers is having a material impact on global supply chains and business confidence throughout the region. However, we believe that secular growth trends within the Asian millennial generation indicates that the region will be an attractive source of investment returns for years to come. Within the next five years, the region will simply be too large to ignore for Australian investors.

Despite better growth outcomes, an investor looking at the relative performance of an Asian equity index versus that of developed nations would be disappointed. Developed market equity markets have outperformed their Asian equivalents since 2010. For this reason, investors have questioned how they should get exposure to Asia within their portfolios.

The problems with passive investing in Asia

To understand the relative underperformance of Asia relative to developed markets, it is important to understand the composition of equity market indices that represent the region. The largest five companies account for over 20% of the index and are thus a large determinant of the market’s performance. By way of comparison, the top five companies in the U.S. S&P 500, and S&P/ASX200 account for 14% and 30% respectively.

Companies and sectors that are likely to benefit going forward in Asia (like health care, consumer discretionary, and services) are under-represented in market cap weighted indices, which are dominated by commodity-based and industrial companies. The index is laden with state-owned enterprises and “old economy” companies. Many of these companies aren’t managed well and aren’t exposed to tomorrow’s growth drivers. The MSCI Asia ex Japan index is also skewed to slower growing nations like South Korea and Taiwan, which account for almost 28% of the index.

As Australian investors already know, the ASX200 index doesn’t represent the full set of opportunities in the Australian equity market, and it is a similar story in Asia. The MSCI Index is restricted by liquidity requirements and it under-represents companies that either trade less or are in the smaller market capitalization range and emerging sectors, where structural growth is currently strongest.

In addition, indices that are constructed using the market capitalization of companies in Asia tend to be backward - rather than forward - looking. This approach rewards those companies that have succeeded in the past, in the old export-driven and commodity hungry economies, without accounting for the potential for future growth or risks.

By taking a forward-looking approach to allocating capital, active investment managers can gain exposure to those sectors that are most likely to benefit from the long-term structural developments spoken about earlier in this paper. As Asian economies continue to move up the economic development curve, their growth models will rotate from export-led development to consumption-led growth, providing opportunities for investors to gain exposure to companies likely to benefit from these trends. Those companies that were the winners yesterday, will not necessarily be the winners of tomorrow.

For example, active investors have the flexibility to quickly shift their investment allocations and can rotate exposures to those sectors and companies with the best risk-adjusted return potential. For example, China’s health care industry is projected to be worth US$2.4 trillion by 20301. While health care in the US is the second largest sector by market cap, it ranks only eighth in China, suggesting that the sector is still early in its development and will likely grow going forward.

Finally, Asian equity markets are less efficient than their developed counterparts. That means active managers like Fidelity International enjoy a greater opportunity to use in-depth research to uncover mispriced securities. For example, the average stock in the MSCI Asia ex Japan Index is covered by fewer sell-side analysts than in the developed markets, and many smaller stocks receive little or no analyst coverage. Divergent legal standards, accounting practices and languages across countries add to the complexity within the region, which is why having regionally-based investment analysts are vital to producing superior performance and equally, avoiding losses.

Getting exposure to the new drivers of Asian growth

When it comes to the emerging consumer, investors often think about retail or ecommerce companies. It is important to highlight that the opportunity to benefit from the long-term structural growth themes extends beyond these sectors. For example, higher incomes, rising air connectivity, travel facilitation, and large infrastructure projects have boosted international travel in Asia. This has had a large impact on Asian destinations’ tourism earnings, which have steadily increased from 17 per cent of the world total in 2000 to 30 per cent in 2018. This is equivalent to US$435 billion in tourism receipts. 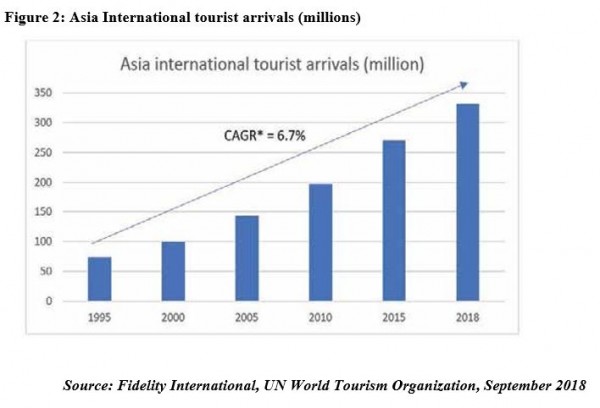 “China has been the undoubted star of the region”

BOC Aviation, a global aircraft operating leasing company, has benefited from the growth trends seen in the Asian tourism sector. Airlines lease aircraft from leasing companies for two main reasons: to operate aircraft without the financial burden of buying them, and to provide temporary increase in capacity. Since inception, BOC Aviation has produced US$3.7 billion in net profit after tax and has distributed over US$670 million to share- holders. 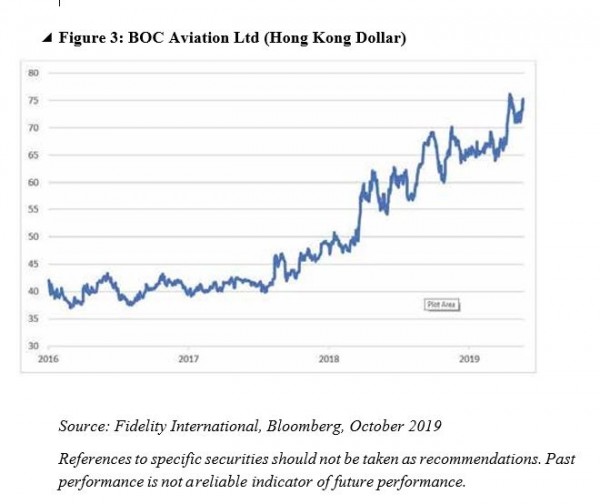 References to specific securities should not be taken as recommendations. Past performance is not a reliable indicator of future performance.

For those looking for the stronger stuff, the world’s most popular spirit, baijiu, is drunk almost exclusively in one country - China. While it’s available for as little as US $1 per bottle from convenience stores across the nation, it’s the premium end of the market that’s set to drive future growth in Chinese alcohol spending. In 2018, the luxury baijiu market reached 1 trillion RMB (US$158.3 billion). The share price of Kweichow Mountain - a Chinese listed manufacturer of baijiu - have almost doubled in 2019 but still only represents 0.2% of the index. 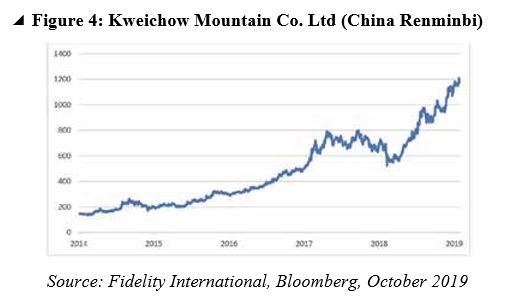 References to specific securities should not be taken as recommendations. Past performance is not a reliable indicator of future performance.

Importantly, themes can also be interwoven. For example, rising Asian food consumption is associated with water consumption, changing diets, land usage and health care. This provides a gateway to other connected themes - from investments in basic infrastructure, agricultural equipment, transport, and the environment.

When it comes to Asia - think active

Global equity indices do not reflect Asia’s current economic and future economic importance. For example, Asia ex Japan only accounts for around 9% of the MSCI All Country World Index. To gain exposure to the opportunity in the region, we believe that the best approach is to invest in locally domiciled companies - rather than foreign multi-national companies - that are best positioned to benefit from the long-term trends and changing consumer preferences in Asia.

In our opinion, if an investor develops a positive investment thesis, then the best way to enhance portfolio returns is to invest in the companies and sectors closest to the thesis. Investing in

Multinational companies domiciled in the developed world will likely dilute portfolio returns relative to direct exposure. By investing directly in the region, an investor also has more control over their asset allocation, rather than trying to speculate or analyses how much exposure a may or may not have to a particular market.

At Fidelity, we believe it is possible to generate superior investment outcomes for our clients, based on a bedrock of fundamental company analysis, robust risk management framework and a highly active approach to stock selection. For this reason, we believe that direct Asian equity market exposure can play a substantial diversifying role in Australian investors’ investment portfolios.

An active approach can harvest the gains on offer in Asia

To highlight the benefits of an active approach to investing in Asia, Figure 5 shows the relative return of the Fidelity Asia Fund and the MSCI Asia ex Japan Index versus the MSCI World Index (as shown previously in Figure 1). An investor who focused on the headline Asia ex Japan Index could assume that the structural, long-term macroeconomic themes in the Asian region are difficult to exploit and should retain their developed market exposure. Hence, a passive investor would have been disappointed in the performance of their investment relative to developed markets since 2010. 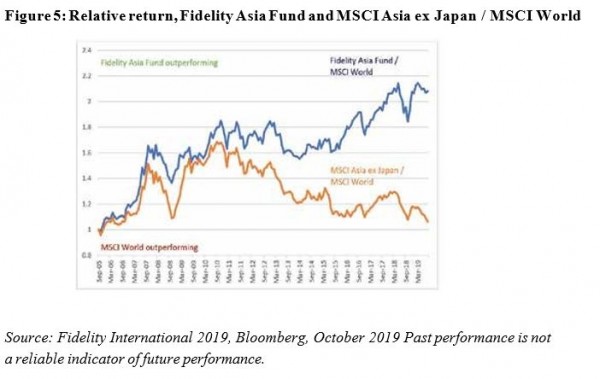 Asian equity markets don’t just offer Australian investors growth potential, they also increasingly offer genuine diversity and possible protection from an economic downturn in the developed world. Of course, proximity to these markets is important for the ability to assess the risk associated with investments there. It's why we place so much emphasis on bottom-up, fundamental research. A concentrated, high conviction approach has resulted in the best performing fund in the Morningstar Equity Asia ex Japan sector and delivered significant outperformance relative to the MSCI AC Asia ex Japan (N) benchmark.

We believe a forward-looking approach, unconstrained by a benchmark, supported by market-leading on-the-ground insights, will continue to provide us with the flexibility to invest in those companies that are best placed to benefit from the structural tailwinds that the region will enjoy for decades to come.