Infrastructure as a Service (IaaS): Big 4 Platform for Growth

So what are we actually talking about when we talk about cloud computing and what is Infrastructure as a Service?

The chart below shows worldwide IT spending by the subsector. It's a $2.1 trillion per annum industry, split by software, devices, IT services, and data center. However, as many of you will know by now as you migrate to the cloud, say with the Microsoft 365 subscription, your data updates, file storage, and security are all hosted and operated within the cloud i.e., on a Microsoft server located far away from your desktop. 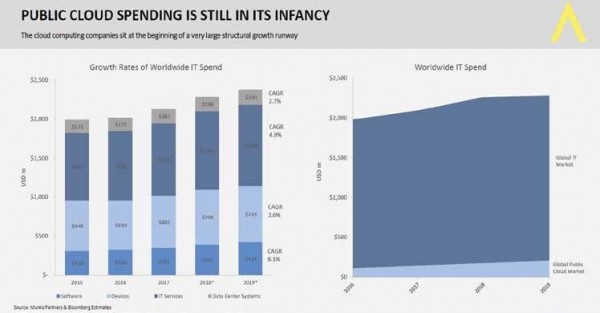 Most consumers find this a far more simple, safer, and cheaper solution than doing it all yourself. So what we see today is the cloud ecosystem continuing to take a bigger share of what is total IT spend, and the lines between these previous subsectors get blurred in favor of the one-stop-shop of the cloud.

So now if we focus just on the public cloud piece, you can see that this is now a $200 billion per annum business and growing rapidly, and it is split between public cloud vendors/users and the infrastructure as a service players (IaaS). The key difference is many of the users/vendors in the cloud are actually outsourcing most of the core compute to the IaaS providers. The IaaS players provide pure cloud storage and compute and highly discounted rates in what is a scale game of cost and security.

Almost all the companies we meet are migrating to the cloud in some form and via the big vendors such as Google, Microsoft, and Amazon, and in the developing world, Alibaba.

These four companies provide scalable, commoditized compute power, via their network of data centers and servers. These are the big 4 winners, accounting for 94% of the global IaaS market.

For software companies and corporates all over the world, this provides discernible benefits; they can run any application or operating system on this Infrastructure as a Service and they can automatically scale, both up and down, depending on demand in terms of uptime and performance. 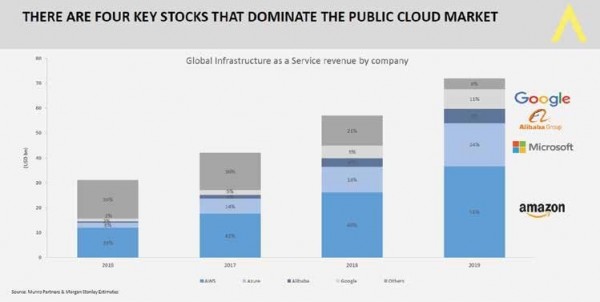 In addition, their scale allows the cost to go down, and hence that accelerates the demand to transition to the cloud. And to do this reliably and with increased performance, you need to be really, really big. Hence, why there are so few of them. These companies are effectively the modern-day railroads enabling the structural shift to cloud computing and due to digitalization ignoring any geographical constraints, this is happening faster than any railroad can be built.

Looking at their share prices you can see the performance of these companies over the last three years below. 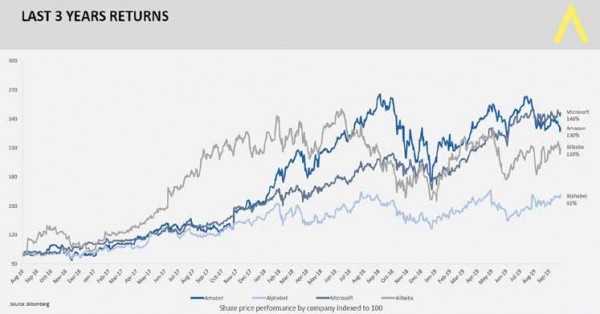 We've actually owned Microsoft, Google, and Amazon since the first day of the Munro Global Growth Fund, and we've owned them for many years prior to that at our previous firm.

For all three, we've enjoyed strong absolute and relative returns as this thesis has played out, while Alibaba is more of a recent addition. Two out of the three names are up over 100% in just three years. However, despite their strong performance, the domination thesis has taken a pause this year.

Have we missed something? Earnings are still growing but their multiples are contracting. We see a number of potential reasons why. The first is obviously regulatory uncertainty. These companies have dominant positions in a number of businesses and this is manifesting itself in concerns about data protection or anti-competitive practices. Microsoft is the cleanest, so to speak, and hence has managed to press on. The second are market influences: the trade war has had its fair share of influence over Alibaba; recent defensive rotations; and the fact that these companies went up in the last two previous years - and stocks don't go up in straight lines.

Looking at the current valuation of these companies – it appears that these concerns are adequately priced in. While generally perceived as high-multiple stocks, we can show you that on an EV to EBITDA basis, they are in fact cheaper than most consumer staples. This is despite 3-4x the expected growth over the next three years, and with dominant competitive positions. 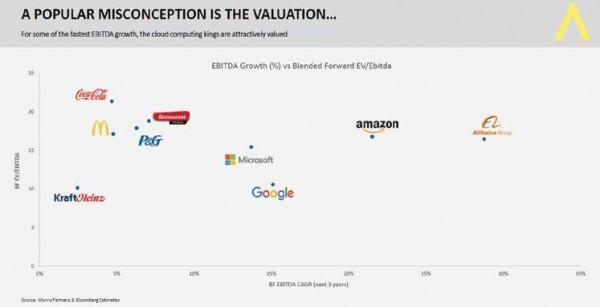 While it's often difficult to forecast the economy, interest rates, political market movements, etc.; forecasting what's going to happen here is actually relatively easy. Assuming lower costs drive the continued migration of workloads to cloud computing over the next five years, and assuming no new significant new entrants, then the big four should enjoy more than doubling of their cloud infrastructure revenues. We would also expect many of them to improve margins significantly as they enjoy the benefits of scale, which will ultimately contribute to sustained earnings growth in the years ahead.

And while we recognize the concerns in the overall market, the maths tells us otherwise. Rather than rotating from growth to value, or high to low multiple stocks, or even from non-dividend to dividend payers, we're choosing to stay the course with these few big winners.

This simply looks like a disconnect between the equity market time horizon and what's happening in the real world. The maths tells us quite clearly that we can reasonably expect them to be a lot bigger in the future and we look forward to a resumption in their performance in the months and years ahead.