Office Markets A Bellwether for the Economy

Our cities are the engines of economic growth. They provide the infrastructure to facilitate growth and their strength provides an important bellwether for the overall economic health of the nation.

Most of Australia’s office markets are in good shape with the average vacancy rate sitting at 9.8% (Figure 1), although this is inflated by the high vacancy rates in Perth CBD (18.4%) and West Perth (16.7%) – both markets are still feeling the effects of the mining downturn. 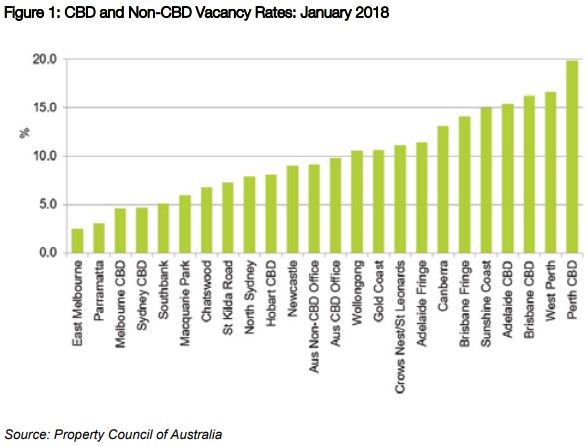 Business sentiment is improving, employment is growing and this is being reflected across most office markets. The December 2017 NAB Business Confidence Index shows businesses are reasonably optimistic and this is being translated in increased investment and job creation. More than 400,000 jobs were created in the past year – the strongest year of job creation over a calendar year on record. Not all of these jobs require an office, but many do, including the fast growing IT and finance sectors.

"Most of Australia’s office markets are in good shape"

The combination of limited new supply in both Sydney CBD and suburban markets in the next few years as well as a reasonably strong economy, points to a positive outlook for Sydney. In Melbourne, although 450,000 square meters of new office space will hit the CBD market in the next three years, more than 50% of this space has been pre-committed and with little new space coming on line in Melbourne’s suburban markets, the outlook for Melbourne is also positive.

It’s not surprising that investors, both domestic and international, have been chasing office buildings. Across Australia, more than $17.0 billion of office transactions occurred in 2017, up slightly on 2016 levels (Figure 2). 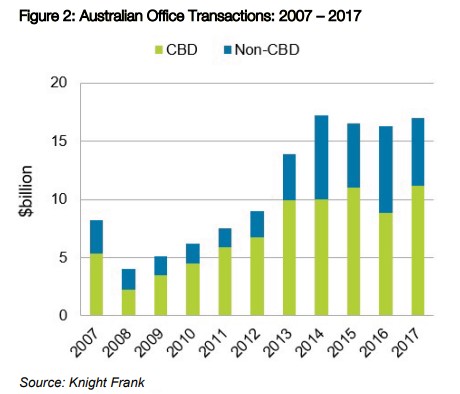 Offshore investors accounted for 43% of all office sales in 2017 followed by unlisted funds/syndicates at 26% and A-REITs at 9%. If the highly influential ULI/PwC Emerging Trends in Real Estate Report is a gauge – offshore investor activity should continue this year. Based on a survey of more than 600 global institutional property investors, financiers and developers in late 2017, ULI/PwC identified Sydney and Melbourne as the two most attractive Asia-Pacific markets to invest in 2018 beating the regional powerhouses of Singapore, Shanghai and Hong Kong. Global investors now consider Sydney and Melbourne as gateway cities alongside New York, London, Paris, Singapore, and Hong Kong. This, combined with their market transparency, relatively high yields (at least compared to other major global cities which are yielding between 3% and 4%) and the positive economic outlook are all key drawcards for global investors.

One of the most talked about issues in 2018 will be the landlord-tenant relationship. The chase for talent is on. You just have to look at the number of each firms that have located in, and around, Martin Place (now referred to as Silicon Place) in Sydney – Apple, LinkedIn, Atlassian, Dropbox, Facebook and Tesla. People want to work in environments inside and outside the office where there is amenity. Today’s tenants are using their office space as an employee attraction and retention tool.

At the same time, to take advantage of the growing number of start-ups and businesses wanting more flexible, “edgy”, collaborative space, we are seeing the rise of co-working spaces. Companies such as WeWork, HUB, Watson and many others, are changing the game. These companies are leasing space from landlords and creating innovative workplace environments (Figure 3) That foster collaboration and networking, provide better amenity, and more flexible lease terms to occupiers. And, whilst it started out a few years ago as a place for start-ups and entrepreneurs to come together, share infrastructure and collaborate, large companies are also now using co-working places either as temporary project space, or places where they can send teams to innovate alongside start-ups. 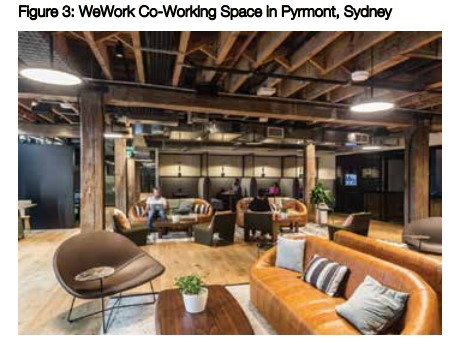 Looking ahead, we expect the pace of office yield compression to slow and the focus to move to income generation as the primary driver of performance. In such an environment, asset specific factors will be critical including landlord tenant relationships, quality of tenants, lease expiry profile, location, and the active management of the building’s facilities. With record high electricity prices, and electricity being one of the major costs of operating a building, efficient operating of the building will be crucial to optimizing the bottom line.