The actress May West once famously observed that too much of a good thing… is wonderful. With the stock market again reaching dizzying heights, at the same time that corporate earnings and global economies are slowing, it’s worth asking whether equity investors have had it too good for too long.

The Australian economy is slowing. While alarmists are suggesting that we are on the precipice of a recession, investors need to make a distinction between ‘post-peak’ growth and a recession, which is negative growth.

According to the IMF, Australia's gross domestic product growth will cool from 2.8 per cent last year to 2.1 per cent in 2019. And while the rate of growth is slowing, it is still positive. The reason for the slowdown is largely due to slumping consumption which drives the majority of GDP.

Part of the reason for these slumping sales is declining house prices, for which our forecasts have been widely published over recent years.

Declining house prices have a negative real-world effect on spending behavior, and when combined with record levels of household debt and little or no wage growth for many years, it should come as no surprise that spending on big-ticket items such as cars and holidays are declining.

The bigger medium-term issue however is the impact of the forthcoming decline in residential construction activity. Since peaking at 280,000 dwellings per year, building approvals have now slumped 40 per cent to 170,000 dwellings. 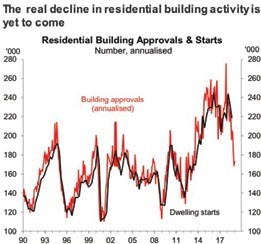 In the absence of a significant jump in unemployment or further falls in property prices, the retail sector will still face headwinds simply because already-low property prices and still-high debt will continue to sap enthusiasm for spending. If house prices fall further, or if consumers slow their drawings from savings, those headwinds will be stronger.

On top of the macroeconomic picture, lending standards have been tightened. The banking Regulator APRA has raised the stressed mortgage serviceability rate to 7.25%. And while the RBA has asked APRA to consider lowering this, APRA has responded thus;

“changes we have made to lift lending standards are …permanent".

“it is important that banks are prepared to take credit risk… if they can't do this, then the economy will suffer”.

Combining the above comments and the macro-economic backdrop, it looks likely the RBA will cut rates this year. And the central bank may also be willing to engage in less conventional policy measures too. Cutting rates to zero or another round of QE (Quantitative Easing).

All of the above is a positive for value investors because it delivers volatility. Volatility delivers lower prices, and the lower the price you pay, the higher your future return.

Over in the States...

Interestingly, the picture in the US is somewhat similar. US GDP growth has slowed from about three per cent to the long-term trend rate of 1.75%. Consequently, the market’s is forecasting rates will need to be cut. But unlike Australia, the enthusiasm for cuts needs to be tempered by the fact that inflation is under control at two per cent, the US economy is described by Fed governors Evans, Rosengarten, and former Chair Yellen as being in “good shape” with mild wage increases and unemployment of 3.8  Per cent – well below the Fed’s internal benchmark of 4.4 per cent. More importantly,  the central bank also sees the Fed Funds rate as ‘neutral’.

“While the rate of growth is slowing, it is still positive”

This latter point should not be underestimated. It means that the Fed has plenty of dry powder to throw at any eventuality, including a recession, which the Fed believes is a very low probability. Rosengarten is reported as being “unequivocal” about the Fed engaging in another round of QE, if necessary, by using its balance sheet again - having ceased shrinking it already and despite very large bond holdings.

Is that a Unicorn?

If domestic and global investors don’t need to be concerned about slowing growth - because their respective central bankers have their back, with potential rate cuts and Quantitative Easing - they should be concerned about valuations in some quarters of the stock market.

One trend evident in the US market is that technology private - equity investors are lining up for the exits. A literal avalanche of Unicorns is preparing to float. Unicorns are loss-making multibillion-dollar start-ups. In many cases, these companies have never been profitable, even though they have been operating for a decade or more.

Perhaps they’re excited about the willingness of smaller investors to pay high prices for profitless companies. Take last year’s IPO of Survey Monkey. In 2018 the company reported a loss for the full-year 2018 of $155 million, compared with a loss of $24 million the year before. Survey Monkey has been in business for 19 years and still doesn’t make a profit. Market value US$2bn!

According to IPO adviser Renaissance Capital, 2019 could prove to be an all-time record for initial public offerings, passing even the legendary 1999 and 2000 years. Sound the siren! Some 226 companies are lining up to list with a combined value of almost US$700bn.

One of those companies is digital social picture board owner Pinterest. After recording a loss of US$130m in 2017 Pinterest reported a reduced loss of US$63m in 2018 and a profit of US$47m in the last quarter of 2018. But keep in mind the company was founded more than a decade ago, in 2008, and has raised more than US$1.5bn from venture capital investors. It’s a long time for investors to wait for any return. No wonder early investors want to see the stock sold at a value of more than US$12bn.

Uber is another business with early investors heading for the exits.

One of the reasons Uber ride-hailing has been able to overtake taxi rides in many cities is simply the fact that the pricing of the service has not been high enough to recoup the investment in the technology and operations of the business. For Uber investors to generate a return from the business, the price would need to be higher. If the price rises, it is likely the service will be used less. In other words, Uber exists because of the benevolence of its shareholders who have tipped in more than US$35bn to keep the dream alive.

As is often the case with world-changing technology, what is good for consumers is not so good for investors. Uber has lost US$6bn in the last two years alone. It also lost just under US$900m in the last quarter of 2018. Its IPO is expected to value the company at US$120bn.

Equity investors might take comfort from the reassuring words of central banks. But of course, as Robert Burns observed, the best-laid plans of mice and men often go awry. We would alert investors to the basic investing tenet; the higher the price you pay, the lower your returns. Paying today’s market prices without regard to business quality and value, even with the support of central banks, remains a low-return, high-risk strategy.

At Montgomery, we are holding low net exposures to the market and rising levels of cash. Any increase in volatility that delivers lower prices is therefore an opportunity for us to lock in higher future returns.