Where are property investors buying the dip?

Every market cycle and each downturn is different, and this one has a way to run yet. But property investors are buying the dip in the coastal suburbs of Adelaide, and are now buying units and townhouses in Brisbane, with a Sydney rebound in the lower price points set to follow, according to Pete Wargent, co-founder of a national marketplace for buyer’s agents, BuyersBuyers.

In the 18 months from December 2017 to June 2019 housing prices at the capital city level fell by about 9 per cent, triggered by a Royal Commission into banking misconduct and a brutal associated credit squeeze, Wargent said.

"In the 1982-3 downturn Australia had a property crunch where nominal prices also fell by about 9 per cent, as the unemployment rate steepled to above 10 per cent," he said.

New lows for the unemployment rate 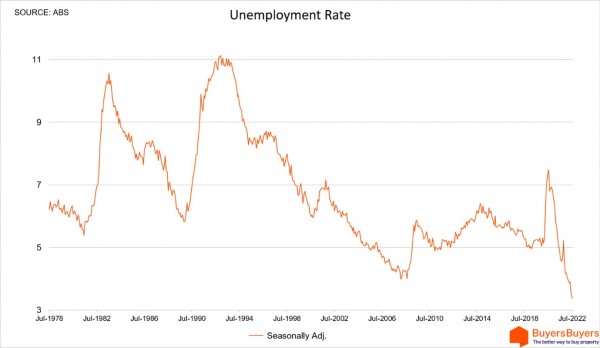 "With more jobs vacancies (480,100) than unemployed persons (473,600), it’s feasible that the unemployment rate could be sporting a 2-handle in the not-too-distant future, and nominal incomes are now rising," Wargent said.

There are few forced sellers around at the moment, with rental vacancies also tracking at close to two-decade lows. To date, nominal housing price declines at the 5-capital city level are down by about 4 per cent, driven by the largest capitals, Sydney (down 7 per cent), Melbourne (down 4 per cent), and Brisbane (down 2 per cent).

BuyersBuyers CEO Doron Peleg said, "the other side of the economic coin is that for the first time since the global financial crisis wash-up Australia is now currently grappling with elevated levels of inflation, with a headline rate which may run as higher as 8 per cent by the end of the calendar year (with a further 4 per cent inflation expected in 2023, and another 3 per cent in 2024). This means that in real terms the peak-to-trough decline in housing prices will be meaningful."

"A chunk of the inflation we are experiencing relates to the housing market itself, including the cost of residential construction and new dwellings, while soaring asking rents (up 14 per cent year-on year nationally) suggest that there will also be some rental price inflation to flow through to the official CPI figures over the next couple of years."

"While real estate has proven to be a strong inflation hedge over the long term, over shorter time periods studies have shown that this does not always prove to be the case. Nobody can say for certain how long the downturn will run for, but our best guess is that sentiment is unlikely to turn positive until households have greater certainty about where the terminal cash rate for the cycle is likely to fall."

"There are always markets within markets, but if pressed we would plump for a peak-to-trough decline of about 10 per cent in nominal prices across the capital cities, with the potential for a bigger decline in Sydney," Peleg said.

What is different this time?

While dynamics of every cycle are necessarily somewhat different, the past two years have presented some unprecedented scenarios.

"Immigration and demographic trends have been fascinating to watch over the past few years, for example. The ‘race for space’ away from high-rise towers in the inner cities and share housing created enormous pressure on many of the regional and suburban rental markets, although it appears that there has been a recent rotation back towards the two largest capital cities," Wargent said.

"Monthly overseas arrivals fell from over 2 million per month to practically speaking zero as the international border closures persisted but have now rebounded sharply to a provisional estimate of 1.1 million in July. International students have yet to return to Australia en masse, but applications hit a record high of more than 40,000 last month, so it’s in the post."

Australia’s skills shortage is becoming acute as some sectors of the economy grapple with capacity constraints, and there is much talk of the new Labor government kicking off a record migration program, combined with an acceleration of the processing over more than ½ million offshore visa applications.

"We’ll have to see how this plays out as we head into the summer months – traditionally a popular time for arrivals into Australia – and how quickly the immigration rebound takes hold, but in markets and economics, shortages are usually followed by gluts (and vice-versa). As temporary visa holder numbers begin a powerful rebound from a stunning ¾ million decline between December 2019 and September 2021, it’s entirely possible that we could see annual population growth exceeding the record highs of half a decade ago at more than 400,000," Wargent said. 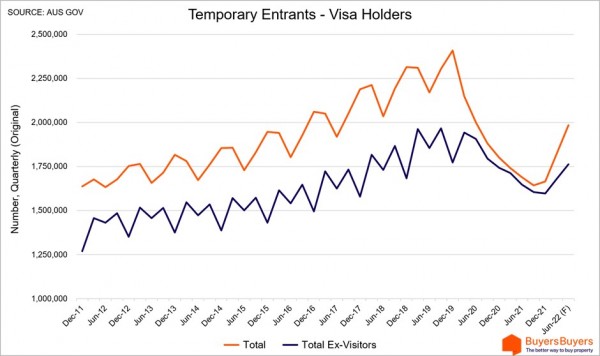 "Unfortunately, meanwhile, construction company failures are now rocketing higher, as developers struggle to deliver a slew of projects that were commenced on fixed price contracts, and the seasonally potent September quarter could see a record number of insolvencies in the sector." 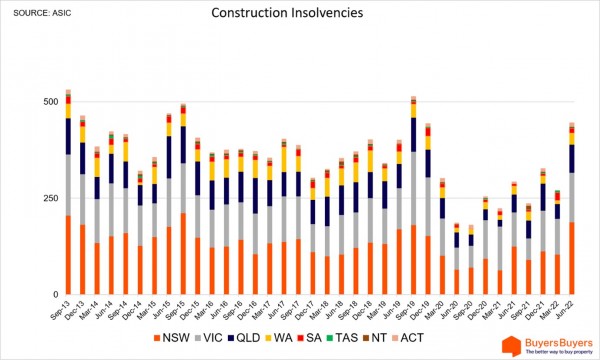 Following after an apartment building boom through the previous housing market cycle the pendulum for unit supply is now swinging in the other direction, partly due to an ongoing dearth of non-resident buyers, who are now discouraged by punitive stamp duty surcharges.

"Combined with a range of factors which are making life increasingly challenging for landlords (including APRA’s 3 percentage points loan serviceability buffer for borrowers, reforms to the Residential Tenancy Act, and proposed land tax changes in Queensland, for example) the looming chronic shortage of rental properties is one of the factors which will bring this housing downturn to an end as the rent versus buy equation shifts," Wargent said.

Where property investors are buying the dip

BuyersBuyers CEO Doron Peleg said, "as investor looking at long-term trends, we always think that it can be a potentially suitable time to buy. The question is where? From our customer enquiries, we can see that popular choices at the moment both for interstate investors and local homebuyers include Adelaide’s coastal suburbs to the south of the city, due to their combination of outstanding lifestyle and relative affordability."

“Queensland is the only state in Australia which has notably more rental properties than landlords - being so persistently popular with interstate investors - and south-east Queensland continues to attract a large share of investor interest, in tandem with record high net interstate migration to the Sunshine State.” 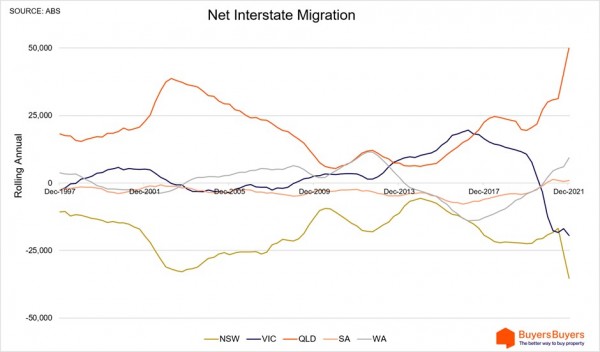 "There are still some affordable options in Brisbane’s northside suburbs, on the Gold Coast, and even on the Sunshine Coast, but buyers need to be more considered about what they buy and the price they pay after a surge through the pandemic. Some investors will take a 10-year view out to the 2032 Brisbane Olympics, to benefit from the infrastructure and investment that this global event will bring," Peleg said.

"In recent weeks and months we have a seen a swing in demand in Brisbane towards townhouses and units, in suburbs such as blue-chip New Farm, or Toowong and Indooroopilly in the inner west, potentially driven by affordability constraints, rising rents, or forthcoming land tax changes (and possibly all three)," Peleg said.

Genuinely contrarian buyers may be taking a look at houses in Perth; after a prolonged period of under-performance the Western Australian now has the most affordable capital city homes of the capital cities.

For homebuyers, the decision-making process is somewhat different, and naturally much depends on individual circumstances, future plans, and the market you are thinking of buying in.

The costs of constructing a home have soared through the pandemic, and still appear to be rising, while the spiralling cost of materials and trades has also made extensions or major renovations unfeasible or excessively risky for many family owners. As such there is some notable competition in Sydney and Melbourne for well-presented renovated homes.

There have been no death duties applied in Australia since 1981, and this has resulted in the build-up of huge inter-generational wealth in Sydney and Melbourne, especially through the various phases of the resources boom. Recent history suggests that prices rarely fall too far in nominal terms before pent-up demand sees circling buyers returning from the sidelines.

Indeed, the current market in Sydney already represents genuine ‘buyer’s market’ conditions. After last year’s market frenzy you can now buy with relatively little competition, and frequently at prices 10 to 15 per cent lower than their 2021 high watermarks, according to Pete Wargent of BuyersByers.

In January 2023, stamp duty is set to be scrapped for first homebuyers up to the $1.5 million price level, which will see first-timers tapping the ‘bank of Mum and Dad’ in a scramble to get into the market. Investors are already well aware that the recovery will therefore be driven from the lower price quartile upwards, and the opportunities at these price points will likely be arbitraged away fairly quickly.

Individual circumstances differ, but with asking rents in the New South Wales capital rising by around 20 per cent over the past year, I’d be a counter-cyclical buyer in Sydney now, particularly in the sub $1.5 million price bracket. There are some great opportunities to pick up established 2-bedroom units in boutique in the inviting suburbs of the north shore at surprisingly attractive price points, for example, particularly in some of the more supply-constrained areas," Wargent said.

"For those looking for a house, the Central Coast and Wollongong markets are likely to spark back into life in 2023 as the tightening cycle reaches its crest and as the state’s stamp duty reform takes effect."

Overall, cautious prospective buyers on the sidelines will be looking for signs that the cash rate may be reaching a peak, or at least that the Reserve Bank is set to taper the pace of its hikes.

"If you’re trying to fine-tune your entry point you’ll need to keep a close eye on year-ahead inflation expectations, bond yields, and futures market pricing for interest rates…but you’ll necessarily miss the bottom by doing so. The only way to negotiate deep discounts, in my experience at least, is to buy when vendors are at their most fearful or pessimistic," Wargent said.