Remember when TV went to colour, from black and white? Or when TEN launched as the third commercial network? What we are now witnessing is the biggest change to come to television since, well, the internet.

TV’s are now being manufactured with operating systems, meaning that the first screen that appears will be one that offers a series of apps like Netflix, HBO, Apple TV, Stan, Amazon Prime, and soon Disney+, rather than channels like Seven, Nine, TEN and the ABC.

That’s bad for local Australian TV stations. But it is epically good for viewers – in fact, there has never been a better time than now, TV-wise, in terms of the sheer range of quality content.

But back to Disney, which along with its massive content library and recent purchase of Murdoch’s Fox TV is about to go large on its own Netflix-like streaming service, including in Australia.

But before we get to that, there will be just one small issue – that of whether Disney is about to make one of the largest business mistakes ever – like the one where Kodak walked away from the digital camera.

Disney’s move into streaming against Netflix is a massive gamble – one the company is so nervous about that it has been extensively briefing Wall Street analysts for months, including a big one recently.

Because, for Disney’s streaming service to succeed, the company will first have to remove its content from rival platforms (which it has already announced where Netflix is concerned) including cable TV customers.

But this removal accounts for 41% of the company’s revenues (US$24.5b in 2018 out of US$59b) and operating income (US$6.6b of US$16b). If its streaming service is to attract significant users (i.e., 50m+) it must forego some or even all of this revenue and profit, and rack up losses instead.

But let’s assume it does get to 50m subscribers, quickly, at the announced price of US$6.99/month (Netflix is US$13). That would be revenue of US$4.2b annually – still, only one quarter the revenue the company is booking today from its existing business, effectively wiping out that 41% of profits. Plus, that is before the losses it would make, which will, definitely, run into billions of dollars.

According to industry bible Variety Magazine:

“Wall Street sources say Disney will have to (tell) investors: how much it will spend on content, how much traditional licensing revenue will be lost by keeping more of its content in-house, and when it expects the bottom of that investment cycle to come before a return to growth.”

“It’s going to be years until they start to recover their investment in streaming”,

“They will be forgoing high-profit margin revenues and moving into a very competitive arena with Netflix and Amazon and probably Apple. Investors are focused right now on the dream of seeing everybody move into streaming. But we need to know more about what the pain points are for these companies and how much they are willing to lose.”

The bind in which Disney finds itself is best reflected in the figures for Hulu, the streaming service that came with the purchase of Fox, which is running at an annual loss of US$1.5b. This is a Netflix-like competitor, except it also has advertising revenue, with a chunky 25m subscribers, which would put it as the number three entertainment service in the US, behind Netflix and Comcast.

(Hulu began life around the same time as Netflix, but with a much better pedigree – its parents were Disney, Fox, and NBC Universal. So why is it still showing losses? For the same reasons that Disney’s new streaming services will soon flood the Disney accounts with red ink.)

Why, then, is Disney making this hugely risky change? Because the alternative is almost certainly much worse. Netflix, HBO (and its Game of Thrones, Sopranos, etc.), Amazon – in fact, on-demand TV generally – are cable TV killers, meaning that as more quality content finds its way onto these low-cost platforms, the number of subscribers to traditional pay TV falls. It’s happening in the US, where cable TV numbers are now freefalling – down 3.3% in 2017 and likely down 4% in 2018. It’s also happening to Foxtel, here, and is the reason the board of News Corporation is in Australia working on a new strategy.

A few more years of pay TV subscriber loss and Disney’s existing media business would have become unprofitable anyway – and then more unprofitable. At which point it becomes an existential question, with the movie division also part of the problem, which in turn will feed into the theme parks, and so on… 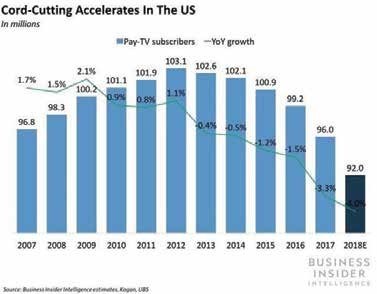 Of course, Disney is probably best set up to move to a streaming model, because it has a series of divisions (parks, movies, etc.) which it can use to finance big production budgets. Combined with Fox, it is reported that its global spend on entertainment (excluding sport) is US$16b (although there will be an amount in there for the running of its American ABC TV and now Fox TV free-to-air networks, which could be more than a third of that figure). Netflix spend on its shows this year is reported to be US$14b, though this won’t be for content available this year only.

Disney has an ace to play with its ESPN Sports Network

And don’t forget, Disney has a big ace to play in the form of its sports content, currently marketed under the ESPN brand in the US and indeed globally, which it could add to the package to get subscribers and dollars. And Netflix, importantly, does not do sport. Were Murdoch to have sold its right wing Fox News with the rest of the assets, Disney could have offered this too. Murdoch chose to keep it.

Of course, it isn’t the case that just because Disney’s push into streaming fails that Netflix will succeed. Disney may fail, but the number of streaming customers it takes from Netflix could still hurt the Netflix growth, and hence the stock price – and both may fail.

Or, indeed, Disney may succeed and so might Netflix, with the two companies fielding differentiated content offerings (Disney doing Marvell, Kids, and Star Wars with Fox content such as Simpsons and Avatar) while Netflix does what it does – field multiple strong competitors in every content genre.

Investors liked the Disney strategy, marking the company up 10% after the move was announced, and taking 4% off Netflix, but to be honest, those of us who have been around a while, have seen this movie before.

As an investor, I believe that streaming will ultimately disrupt and supplant traditional free-to-air channel viewing globally, with the emergence of four or five players, like Disney+ and HBO, along with Netflix and maybe Apple, to emerge as the new majors.

But I also believe that those buyers who pushed the Disney stock price up 30% in the three-month lead-up to this announcement, won’t be the same as those who will be around to stomach the five years of grinding and significant losses the company will have to absorb, all with little clarity on the final success of the venture. For Disney, this may be a fairy tale ending, but the plot calls for some very dark times first.