Taxpayers with the Lowest Income Tax Rate are Hardest Hit

In all the talk about refundable franking credits, it is easy to overlook the fact that a franking credit is additional income as well as a tax credit. The purpose of Australia’s franking system is to transfer all of the company profit to the shareholders as additional income where it is then taxed at shareholders’ marginal tax rates. But the shareholders only receive the dividends as money in the bank, which are paid out of the company’s after-tax income.

Therefore, the shareholder also needs to include the company tax portion, withheld by the ATO, as well as the dividend in their taxable income. The portion withheld by the ATO then become a tax credit that can be set against the taxpayer’s own tax liability.

At present, if that tax credit exceeds their tax liability, taxpayers are entitled to a cash refund, just like a PAYG taxpayer who finds their employer has paid too much tax on their behalf. Under Labor’s proposal, franking credits will not be abolished, but excess tax credit will be withheld. The effect is that taxpayers with the lowest income tax rates are the hardest hit.

Company tax is a constant 30% regardless of the amount of profit being taxed. When that company profit is transferred to the shareholder for tax purposes, it is both additional income and a tax credit to account for the company tax already paid. The franking credit, therefore, represents 30% of the total income that a taxpayer derives from Australian shares.

The company tax rate of 30% is constant, but income taxes are progressive. This generates excess franking credits (and therefore tax refunds) on all low and middle incomes.

If we were to revert to the situation that existed before 1987 when there were no franking credits, and there were no tax refunds. Tax on dividends would then be identical to the tax on bank interest.

If we fast-forward to today and assume that all of our example taxpayer’s income is derived from franked dividends, the following table illustrates how the constant rate of company tax interacts with the rising proportion of tax as incomes rise. For simplicity, the tax payable has ignored the Medicare levy, which increases the tax and tax offsets which reduce it. 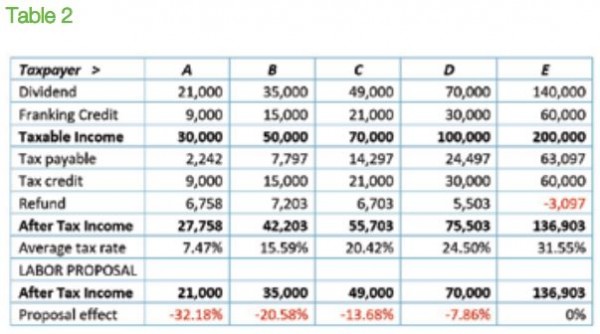 In the table above, it is very clear that the franking credit is a constant 30% of the taxable income. It also shows that franking credit exceeds the tax liability on all incomes where the 30% company tax rate exceeds the average income tax rate. That excess tax credit is presently refunded as cash.

It is very clear that as the franking credit is income that is additional to the dividend. Taxpayer “A” has a taxable income of $30,000 and pays $2,242 in tax. With the tax credit of $9,000, s/he is entitled to a cash refund of $6,758. Under Labor’s proposal that excess tax credit will be withheld. Without the refund of the excess tax credit, Taxpayer “A” has a taxable income of $30,000 and an after-tax income of $21,000. S/he has paid $9,000 tax on that taxable income compared to a PAYG taxpayer who pays $2,242 on the same taxable income. Without the cash refund, the effective minimum tax on those dividends is 30%, regardless of the marginal tax rate.

That difference between the two rates disappears completely when the average income tax rate is equal to the company tax rate of 30%. But the average income tax rate does not reach 30% until incomes are very high. The above table clearly shows that only taxpayer “E”, with the highest income, will not experience any reduction in after-tax income as a result of Labor’s proposal and will continue to be able to fully utilize their franking credits to pay their tax liability.

All taxpayers with dividend incomes below $140,000 will lose some of that tax credit refund, and those on the lowest incomes lose the most proportionally. This proposal has the effect of hitting taxpayers on the lowest tax rates the hardest unless they belong to one of the exempt groups.

The ignorance around the fact that taxes on company profits are both additional taxable income and a tax credit for shareholders, allows Labor to pretend that company profits are somehow separated from the shareholders who are responsible for the tax payable on that profit. Labor’s proposal focuses only on the tax credit, which may or may not be refunded, while willfully ignoring the fact that shareholders also have a higher taxable income (and tax liability) due to those dividends and company taxes. To complete the fiction, Labor likes to pretend that franking credits are a gift from the ATO through a loophole unavailable to less sophisticated investors.

Under Labor’s proposal, the effective minimum tax rate on dividends (and only dividends) will be 30% regardless of a taxpayer’s marginal tax rate for all “non- exempt” Australian shareholders. Although retirees tend to have lower marginal tax rates, the impact of this proposal is certainly not limited to retirees.