The cycle’s end is far from imminent

Easing geo-political tensions and signs of stabilising growth have seen international and domestic equity markets reach new highs in early 2020, while bond yields remain well above their cycle lows. But as is often the case, each year brings new challenges.  Market valuations in early 2020 have quickly become stretched, while the recent coronavirus outbreak in central China is denting sentiment about near-term growth.

Yet 2020 does not appear to hold an imminent end to the cycle. Absent a new array of geo-political shocks, the world’s current ‘new normal’ of moderate growth, low inflation and relatively stable rates look set to persist for now. While equity indices were up strongly in 2019, average gains look less threatening when the late 2018 correction is included. Together, even as the cycle matures, these features argue for remaining invested and engaged, and taking tactical risk opportunistically.

Geo-political tensions have eased over the past two months. The UK Conservative Party secured a larger-than-forecast majority at the mid-December election, with the Brexit Withdrawal Agreement subsequently passing both the UK and European parliaments. In mid-January, the US and China signed a phase-one trade deal. China agreed to buy more US goods over the next two years and increase penalties for intellectual property theft. The US agreed to cancel the mid-December tariffs (while prior tariffs largely stay in place), while also recanting its designation of China as a ‘currency manipulator’. In a move that could extend the calm, the US and China agreed to delay a phase-two deal until after November’s US presidential election. Military action between the US and Iran was also avoided.

Activity data has also shown signs of stabilising. Over the past couple of months, signs of stabilisation have emerged in China, with a December pick-up in industrial production, retail sales and exports. In January, purchasing manager indices (PMIs) across the UK, Japan and Europe moved higher, while US growth proved resilient near 2% (with solid consumer spending and signs of a pick-up in housing activity). In Australia, business and consumer confidence has remained subdued, and concerns have grown about the impact on growth from the recent devastating bushfires—as well as any impact of the coronavirus on tourism. However, in late 2019, jobs growth accelerated, the unemployment rate fell to a nine-month low, house prices and lending continued to rise, and consumer spending lifted.

A casual glance at equity returns for 2019 undoubtedly flags caution about expecting similar returns for 2020. World equity markets rose by around 25% in 2019, led by a rise of 29% in the US. In Europe, the UK and Australia, equity indices gained more than 20%, while Japan and emerging market indices rose by more than 15% (see the table below).

However, as also shown in the table below, when we include the sharp (near-bear market) correction for equity markets in late 2018, over the past couple of years, the per annum (pa) returns, excluding dividends, look far less breath-taking. Indeed, global equities have risen by just 6% pa over the past two years. The US market remains the stand-out with annualised gains of about 10% followed by Australia with 6%. Most other markets returned less than 4%, while emerging markets, including Asia, have contracted.

Of course, with little material improvement in the earnings outlook, valuations have risen from arguably fully valued levels in early December to be well above their 10-year averages. In particular, on a 12-month forward price-to-earnings (P/E) basis, domestic and US markets are now more than three points higher than their 10-year average. 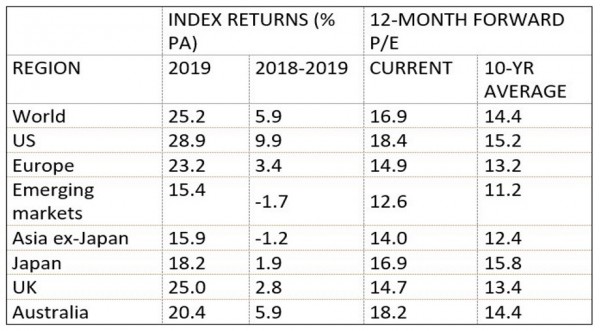 “The most likely outlook for the new year, absent shocks, will be modest growth” 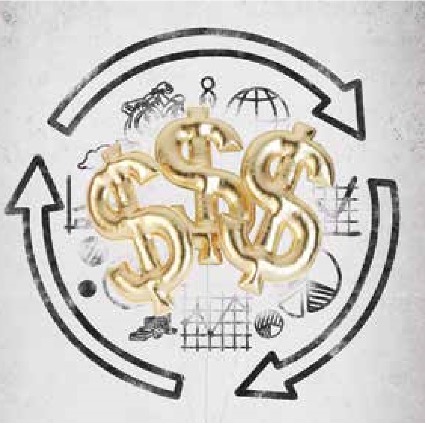 Where are the Risks to the 2020 Outlook?

Global growth over the past couple of years has been ebbing and flowing through what can best be described as some sort of new normal. Key features of this include low growth, low inflation but still very healthy jobs markets around the world. This has tended to see growth not slow too much, nor accelerate in response to easier policy.

It still appears the most likely outlook for the new year, absent shocks, will be modest growth. With more stable activity and geo-politics than 2019, central banks globally are also likely to be far less active. This is a reasonably supportive backdrop for risk markets.

The risks to this relatively benign outlook come from shocks that could push the world economy more sharply in either direction.

On the downside—renewed political turmoil out of either Brexit or the US-China trade dispute has the potential to dent the macro outlook. Less likely, a near-term upswing in inflation would challenge the ongoing low interest rate environment. Either of these risks could cause a material correction unless it is offset by already unfolding improving corporate earnings momentum.

On the upside—an uplift in productivity and global investment that spurs a resurgence in global demand, trade and manufacturing activity could deliver a significantly better growth backdrop. In this scenario, stronger earnings would deliver better-than-expected equity returns (and higher bond yields).

Latest Developments in the Coronavirus Outbreak

The recent outbreak of the 2019-nCoV (coronavirus) in central China destabilised markets in late January. At present, its severity remains uncertain. There are some comparisons that can be made to the 2002-2003 Severe Acute Respiratory Syndrome (SARS) outbreak in Greater China.

According to experts in the US, the coronavirus appears to be more contagious than SARS; it took four months for 1,000 SARS cases to be recorded, versus less than 25 days for the coronavirus (where latest estimates put the number of confirmed cases at over 28,000). China’s economy is also a larger contributor to global activity than it was in 2002-2003. However, a significantly lower mortality rate (around 2% compared with 10% for SARS) suggests the disease may be less severe. In addition, China’s response has been earlier and more proactive than during the SARS outbreak. According to UBS, China’s health system is also more experienced than it was in 2012-13.

Like previous outbreaks, these events have the potential to significantly impact activity and dent market sentiment in the short term before activity bounces back. It is likely that forecasts for growth in China, Australia and other regions may be revised lower for Q1 2020. The most significant impact of these type of events typically falls on sectors such as retail, travel and entertainment. For Australia, export sectors linked to China, such as resources and tourism, are also vulnerable.

While it remains premature to draw conclusions, there are reasons to believe that the current coronavirus outbreak may be contained in a shorter time frame than SARS (nine months). Key will be signals from authorities that the peak in the pace of the infection’s spread has been reached.

The past couple of years have been dominated by geo-political volatility that has weighed from time to time on the growth outlook, most particularly as 2019 drew to a close. Ongoing geo-political skirmishes are likely to be a feature of the ‘new normal’ investment horizon, as is the rise of emerging economies, including China, tech disruption and ongoing accelerating digitalisation of the world economy.

Overall, the potential for some stabilisation of global growth that underpins an improved earnings outlook in the wake of only moderate equity gains over the past two years argues that the cycle’s end is far from imminent. However, the recent coronavirus outbreak has likely somewhat delayed our more constructive outlook into mid-year. Signs the outbreak is being contained should encourage some stabilisation in markets and a refocusing of investors’ attention on medium-term fundamentals.

Finally, diversified portfolios provide the best defence to an uncertain outlook. Despite the elongated macro cycle (a feature of the unfolding new normal), conditions do not support being disengaged or disinvesting from markets. As recently highlighted by Wayne Thorpe, Senior Financial Analyst at the American Association of Individual Investors Journal, since 1871, the average time for the US equity market to fully recover is 7.9 months. According to Thorpe’s analysis, 50% of market downturns recover within two months and 80% of market downturns recover within one year.