We Need to Talk About Value Investing...

What is happening to value investment managers? In the past year, one of the best in the market, Steve Johnson from Forager, has publicly written about the problems the fund is having in Australia, where the WAAAX trade (Wasatch, Append, Afterpay, Altium, Xero) reigns supreme. Elsewhere other managers, including the value-based JCP, Sigma Funds Management, James Spencely’s Mohr Asset Management and even Janus Henderson have shut down or are winding back.

Not all of these managers are value funds – some are being hurt by the on-going shift to indexing (more on this later) but the question could be asked: is value investing wrong?

In our view, definitely not. But is it wrong now, in this 20-year period? The answer has been, and is still, yes, but the reasons haven't been written in any authoritative text that we have seen. That's the thing about history - it often takes a generation to be properly understood.

And these are historic times - not just in the sense of geopolitics, but for business and investment. They are historic because the pace of change has increased so dramatically. This is a hard thing to measure, but there are a number of proxies. For example, a widely quoted paper produced by a University of Southern California academic Martin Hilbert with Priscila Lopez estimates that the sum of all recordable knowledge (books, paintings, maps, technical data etc. – in fact anything recorded by a person at any time until 1986) amounted to 2.64 billion gigabytes. As of 2012, that amount - the amount of data produced over the time since humans could record it - started doubling every 8 weeks. It is certainly doubling much faster now.

Most of these data are ephemeral – news broadcasts, traffic loads and flows, tweets. But increasingly, the tools exist to extract meaning out of this data, resulting in applications which until recently could not have been contemplated. If you have been thinking that YouTube cat videos have no purpose that is incorrect. They were used as foundational inputs for work which forms part of machine learning that allows your car to give lane change warnings. Or to Auto-complete your Google search query. And literally thousands of other predictive applications.

So, the story of knowledge into data and then into actionable intelligence is now increasingly well understood. And its effects on the stock market are dramatic, to say the least. 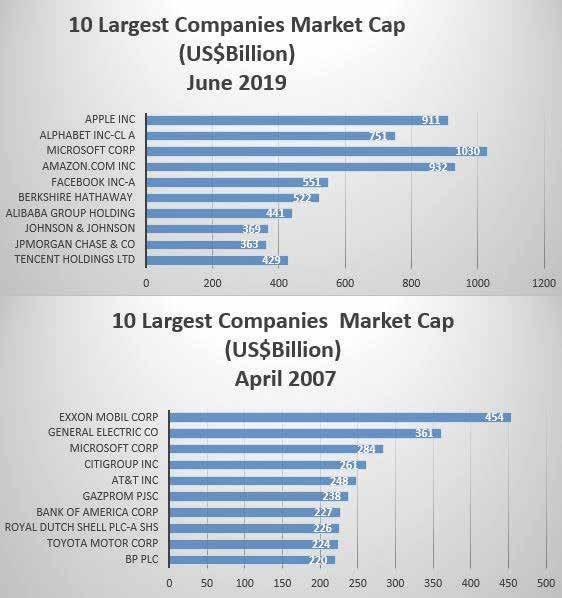 It could be argued that this is because of the over-valuation of technology, and indeed this could be right - we won’t know the answer to this for some time, by which point value as an investment strategy may have had its resurgence. But we do know that these technology disruptors have become valuable because the data and tools they use to disrupt one industry have had significant unforeseen flow-on effects on many others. Apple disrupted landline telephony, but also camera and film companies, advertising, media, mapping and a host of others. Amazon disrupted retail. Tesla disrupted the internal combustion engine and oil. In the process, the value of these disrupted industries (cameras, cd players in the case of Apple) became subsumed the value of the disruptors.

So, values of the disrupted companies have fallen significantly, leading many value players to conclude that they meet the criteria for value investing – which normally, would be true.

But this time is different. It is like waiting for the value of horse-and-buggy companies to go up after the production of the first T-Model Ford. This is the problem for value investors – faced with record low valuations for some previously well-regarded big names, there isn’t, for now, much chance of a reversal, at least not until we know which companies will be left standing.

And we are now seeing some reasonably unpredictable outcomes. No less important companies than Walmart and Disney have elected to attempt to disrupt their industries and themselves – Disney with its streaming service (to compete with Netflix) and Walmart with its online retailer Jet.com. These two companies are no longer content with fielding a pre-disruption model only – they have launched significant plays which have the capacity to shred their existing earnings base. And – here is the kicker - both are now trading at close to all-time highs as a result. From value to growth, in a single bound. Perversely, in the process, they make themselves un-investible for the value managers, compounding the problem.

The on-going move to index investing is a different problem affecting active players in Australia. There is no one-size-fits-all answer here, but plainly some managers do outperform indices. Just because on average you could do better in a passive index fund will mean nothing to an investor in an outperforming equity product. If you don’t believe me, try suggesting a passive strategy to Warren Buffett (or any other out-performing managers). Neither he nor his investors are likely to drink that Kool-Aid.

And even if passive investing provided a solution, which product in which market should you choose? There are thousands of index ETF’s – they don’t all perform that well, because the underlying stocks in the indices they track do not do all that well. So, as an investor, you still have to pick the right one. Same problem, in the end, as picking stocks, or managers.

It is five years since Loftus Peak hung out its shingle in funds management. Many will be familiar with the company's approach - viewing global business through the lens of disruption. When we started in 2014, there was some expectation that the party was over - most people had a smart phone and used Google. What else was left?

Plenty, as it turned out. Apple and Alibaba doubled, Amazon went up 500% to just under US$2000 a share - and stayed there. There is still a lot left to roll - banking and fintech, transport, health, energy to name just a few.

So, we still prefer the active approach for one simple reason – staying focused on the drivers that are changing business is a more certain way of extracting return from the stock market.