What Can We Learn From Where Institutions Invest in Real Estate?

Low interest rates have spurred demand for real estate across the globe and Australia has been a major beneficiary. The hunt for yield is front and center of investors’ minds. Not surprising then, that the inflow of capital into Australian commercial real estate hit a record high in September as both domestic and global investors sought to deploy capital into the market. According to Cushman & Wakefield 1, $45.6 billion of commercial real estate transacted in the year to September, almost 50% more than the $31 billion transacted back in September 2014 (Figure 1). 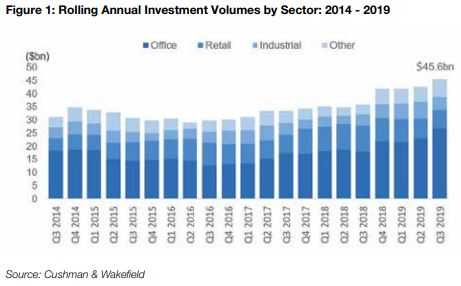 The inflow of foreign direct investment into commercial property also hit a record, with $20 billion invested in the year to September. Foreign investors accounted for 44% of all transaction volumes (Figure 2), with the Singaporeans ($4.2 billion) and Canadians ($3.9 billion) leading the way. 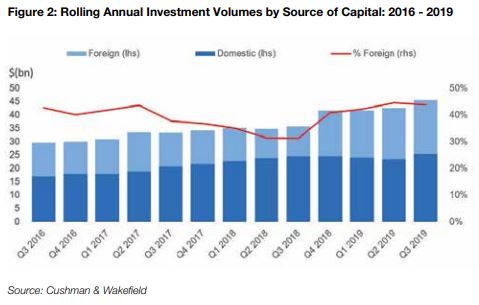 Office property was clearly in favor with both domestic and global institutions. Circa $27 billion of office assets changed hands in the year, double the volume traded in 2015 (Figure 1).

Australian office assets are perceived as attractive in the global context due to their relatively high yield compared to other markets like Singapore, Hong Kong, New York, and London, the forecast rental growth over the next few years, the high levels of market transparency and, more recently, the lower Australian dollar (which gives offshore investors more buying power). Furthermore, the current office occupier environment would underscore confidence, with office vacancy levels in the two gateway cities of Sydney and Melbourne at near-record-low levels.

Office yields have been trending down since late 2009 with national yields at their lowest levels on record (lower yields equate to higher values) (Figure 3). The average prime CBD office yield reached 5.35% in September 2019. With the recent trend downwards trend in global bond yields, the spread between the Australian 10-year bond yield (considered the risk free rate) and the prime CBD office yield has increased to 439 basis points (4.39%), well above the 10-year average of 330 basis points (3.30%), and the negative spread of 50 basis points (0.5%) recorded at the last peak in the market back in 2007. 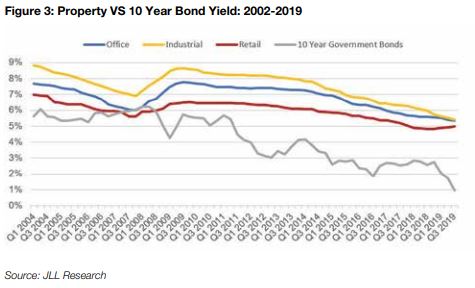 Cushman and Wakefield reported that investment into the retail sector continued to moderate, recording its fifth consecutive decline in annual volumes in the past year. Just $6.4 billion was transacted in the 12 months to September 2019, down 33% on the previous year.

Weakness in consumption growth and ongoing structural shifts away from traditional retail channels to online continue to create challenges for traditional bricks and mortar retailers. Landlords are being forced to refine their asset strategies, as retailers reconfigure their store locations, with a number of retailers closing stores in underperforming centers.

A few unlisted retail sector funds that own large scale shopping centers are having to sell centers to fund redemptions as institutional investors become increasingly wary about their exposure to retail property. Recently, the Lend Lease managed fund Australian Prime Property Fund Retail (APPF Retail) sold its 50% stake in Westfield Marion shopping center in Adelaide for $670 million, reportedly at an 8% discount to the Centre’s December 2018 valuation to fund redemptions. The 136,851 sq. (GLA) Westfield Marion is the largest and the only super regional shopping center in South Australia. The government-owned Queensland Investment Corporation (QIC) is also moving to sell its stake in a $1 billion group of US shopping malls to meet redemptions following their inability to attract new capital into the fund.

However, there are bright spots in the retail landscape. Investors continued to chase neighborhood centers and freestanding supermarkets, which are still considered attractive due to their high exposure to convenience-based retailing, and their rents are underpinned by the major supermarket operators - Coles, Woolworths, Metcash (IGA), and Aldi. Approximately $600 million of transactions were undertaken in this segment of the retail sector in the past year.

Industrial transaction volumes slipped from $6.3 billion in 2018 to $5.1 billion in 2019. This decline was driven by a shortage of quality assets coming to the market as owners elected to hold onto assets rather than a pullback by buyers.

The growth in Australia’s global trade, the boom in e-commerce, and businesses wishing to drive efficiencies at lower costs in their supply chain have driven a re-rating of industrial property globally by investors. Large distribution centers leased to retailers and third-party logistics (3PL) firms, which provide distribution, warehousing, and fulfillment services to third-party customers, are transforming the industrial landscape. The modern-day logistics facilities, which increasingly include multi-story racking, and high-speed conveyor and sorting systems powered by the latest IT, are being located close to major trade hubs (ports and intermodal rail facilities), freeway interchanges, and urban in-fill areas. At the same time, smaller industrial properties located in the in-fill locations are also in demand by retailers and the 3PLs for last-mile delivery centers. Speed to market and lower distribution costs for these tenants is critical.

And there is no shortage of capital wanting to invest in the industrial sector. An increasing number of institutional investors are reweighting their portfolios from retail into industrial property. Charter Hall’s Prime Industrial Fund, the second largest unlisted industrial fund in Australia, recently closed its $725 million equity raising significantly oversubscribed. Strong interest was received from both local and offshore institutional investors seeking exposure to the Australian industrial property market.

We remain positive on the industrial sector. The supply of modern logistics facilities is low, pushing vacancy rates lower and rents higher, particularly in the land constrained Sydney market. The Melbourne market is also attractive driven by strong population growth, infrastructure upgrades, and the relatively cheaper rents in Melbourne compared to Sydney.

The latest APRA survey of Australian superannuation funds3shows the average allocation to property of industry funds was 9.9%, retail funds 6.6%, and corporate funds 9.0%.

Whilst this cycle has gone on for almost 10 years (the GFC seems so long ago), we are not suffering from the two evils that normally tip the market over – high leverage or over-supply lead by speculative developments. As a result, the commercial real estate market remains in relatively good shape and is well placed to weather any economic slowdown that may eventuate in the next few years.

In today’s low-interest environment, resilient and growing income streams through the cycle will be attractive to investors from global pension funds through to smaller private investors. Private investors can access office, retail and industrial assets via real estate investment trusts listed on the ASX (A-REITs) and unlisted property funds offered by groups such as Charter Hall. Investors should ensure that any real estate investment is underpinned by well-located, quality assets that are leased to strong tenant covenants on long term leases.