Why Invest in Emerging Markets

Investors typically have on hand a long list of concerns arguing against investing in emerging markets. These concerns often center on the ability to regather capital once invested, the extent of government intervention, the ranking of investors’ interests, issues of corporate governance, as well as the inherent volatility likely to be experienced in emerging markets.

But we argue that these concerns are not insurmountable, particularly compared with the increasing benefits of long-term strategic exposure to these markets. These benefits include much faster economic and population growth (particularly for millennial consumers) and greater exposure to many ‘new world’ themes. Importantly, emerging market equities also bring diversification benefits, with a significantly below-average correlation to other equity markets. This is a key strategic advantage as we negotiate the later stages of the current extended economic and market cycle.

Tactically, Crestone began moving portfolios overweight emerging market equities in late September 2018. Last year’s tariff dispute, slower global growth, higher oil prices, and a rising US dollar had all contributed to a sharp correction in emerging market equities and value was appearing. These markets have outperformed developed markets by about 5% since then. We still favor a moderate tactical overweight to emerging markets, but they are no longer as cheap as they were last year.

Of course, not all emerging markets are created equal, and the fragility of countries like Turkey and Argentina are in stark contrast to the generally stronger fundamentals across the broader emerging market complex, even relative to a few years ago. Asia remains a key focus in the emerging markets, particularly China, India, and South Korea, along with Brazil and South Africa, as well as others.

A disciplined strategic asset allocation is responsible for around 80% of long-term investment performance—and diversification plays a critical role. Our research suggests emerging market equities should strategically represent 6% of a growth-focused portfolio. They are the fastest-growing part of the world; they provide access to secular investment themes, and; they provide a good source of diversification.

The fastest-growing part of the world by far

In 2018, the IMF forecast future growth in emerging markets to be at least two percentage points faster than for developed economies. India remains one of the world’s fastest-growing economies, with UBS expecting more than 7% growth in 2019 and 2020. Asia ex-China is also seen growing by more than 5% a year. Fidelity International highlights that, while emerging markets are 54% of world output, their equities were only 12% of the MSCI AC World index in 2010. Credit Suisse believes emerging Asia’s corporate bond markets will rise to nearly 30% of the global market by 2030.

Reflecting this, MSCI announced in March this year that it is quadrupling the weight of China’s mainland shares in its emerging market index, from around 0.7% to 3.3% by November 2019. Similarly, Chinese debt (the third largest market in the world) is increasingly being added to global bond benchmarks. Emerging market debt can provide higher yields than developed markets—but this also comes with higher volatility. 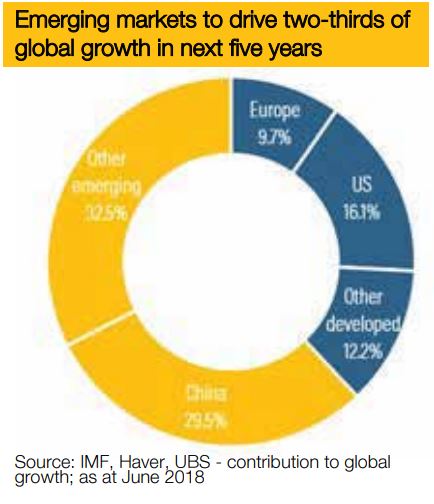 Emerging market economies are transforming from commodity-intensive, domestic- infrastructure and export-manufacturing economies to services-based economies. Large pools of domestic savings are now able to fuel consumption as the primary driver of economic growth.

The United Nations projects that the world’s population will increase by 41% to 9 billion by 2050, with nearly all this growth in developing countries. Strong growth in working-age populations, urbanization, and a rising middle class are expected to underpin strong consumer spending, one of the most important megatrends of the next decade.

When it comes to the emerging consumer, it is not uncommon for investors to default to just retail or eCommerce. Yet, there is a myriad of other opportunities ranging from education (where an estimated 100 million children have never been to school) to tourism (where less than 10% of China’s population holds a passport) through to agricultural equipment, genetics, water treatment, drug development, and home delivery.

Emerging economies, particularly China, continue to focus on rapid growth in technology. According to the Financial Times, in 2016 China published more academic papers on artificial intelligence (AI) than all the countries in the European Union, and it overtook the US in terms of the number of AI papers in the top 5% of ‘most cited research’. 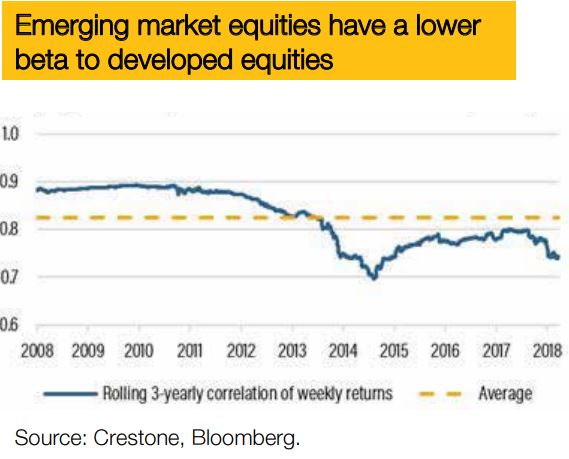 Diversification within an equity portfolio

Over the past five years, the correlation of emerging market equities to their developed peers has fallen from 90% (similar to the correlation between US and European equity markets) to only about 70%. When we consider individual markets, like India, their correlation to developed markets is around half of this.

The higher long-term return opportunity in both emerging market equities and bonds necessarily embodies higher year-to-year volatility and risk than developed markets. Yet given many emerging market economies are driven by local issues, this can be managed by a diversified exposure.

From a macro-economic perspective, foreign debt exposures and current account positions look materially better than they did two decades ago during the Asian Financial Crisis, and also look significantly improved from as recent as five years ago. On these metrics, only a few countries, such as Turkey, Argentina, and Colombia, look problematic.

In regard to risks of government intervention—while these risks remain, they appear no less significant than investors might experience in advanced countries, such as in the US (particularly in the technology and social media sectors), Australia (in terms of a broad range of sectors due to a potential change of government) or the UK (from Brexitl).

Rule of law remains a persistent and warranted concern for emerging market investors. Uncertainty remains over how laws are enforced and where investors and corporates rank during disputes. Similarly, emerging market investing requires attention to social responsibility—particularly environmental, social and governance issues, and issues of sustainability.

How to gain exposure to emerging markets

We prefer active management in emerging markets, where experienced managers can address the inefficiencies that can exist in less researched markets. This approach is best able to efficiently access growth opportunities across a broad spectrum of emerging markets, while addressing any potential governance issues more easily than a passive approach.