Why is the Most Critical Metal on Earth Critical?

“Tungsten is the most critical metal”

Warren Buffet famously said “You only find out who is swimming naked when the tide goes out”. A great metaphor for our situation today, on a number of fronts, as COVID-19 has shown us that many governments have been swimming naked for a long time – particularly when it comes to metal supply security.

The issue of critical metals has been gaining traction for several years. The Electric Vehicle (EV) and Lithium Ion Battery (LIB) boom brought the issue into the open in late 2015 when explorers and investors realised that there would be a massive shortfall in lithium, cobalt, and other battery metals – with the exception of a few forward thinkers such as Orocobre (ASX:ORO), Neometals (ASX:NMT), and Galaxy Resources (ASX:GXY), before this, lithium may as well have been clay.

The term “critical metals” applies to a suite of metals which are critical to an ongoing and functioning industrial sector and which are critical for technological innovation and advancement. Many of these metals are not commonly known and they are used in relatively small quantities. In many cases the deposit grades are in the vicinity of 1,000ppm or 0.1%, and lower – therefore mining costs on a per unit basis can be very high.

The resource grade of the leading non-Chinese tungsten mine, Masan Resources’ Nui Phao tungsten project in Vietnam, is about 0.2% tungsten trioxide (WO3). Nui Phao is a peer group leader because it has very good economics, in part because it is located in a low cost environment. Capital and operating costs are key hurdles for most metal projects.

In 2017, the European Commission (EC) published a list of twenty seven Critical Raw Materials (CRM) for the security of the European Union, the fourth triennial update of this list is due later this year.

Although this list of CRMs is geared to the industrial requirements of the EU, it is relevant to most, if not all advanced economies. The US, UK, and other countries have generated similar lists with the majority of CRMs common to all.

Geology and geography are key factors

We have no control over where economic mineralisation occurs - and many critical metals are located in countries which introduce a new set of problems, i.e. political risk and supply chain transparency; the latter is becoming a mandatory requirement of many Original Equipment Manufacturers. For example, about 70% of the world’s cobalt is produced in the DRC and the remaining 30% is supplied by 10 or so other countries, none of which satisfy more than 5% of annual demand. This is the reason why investors got behind a number of cobalt stocks in 2016 and 2017, including Cobalt Blue (ASX:COB), Clean Teq (ASX:CLQ), Australian Mines (ASX:AUZ), and several others, and, as is typical in minerals exploration, there is a long trail of project failures.

According to the EC’s 2017 list of CRMs 87% of Antimony is produced by China; over 60% of Borate is produced by Turkey and the US; about 80% of Hafnium is produced by France and the US; 73% of Helium by the US; 87% of Magnesium by China; and 84% of Tungsten by China. Metal ownership and control is a strategy at the country and the company level, some have and are executing their strategies very well, many are not. 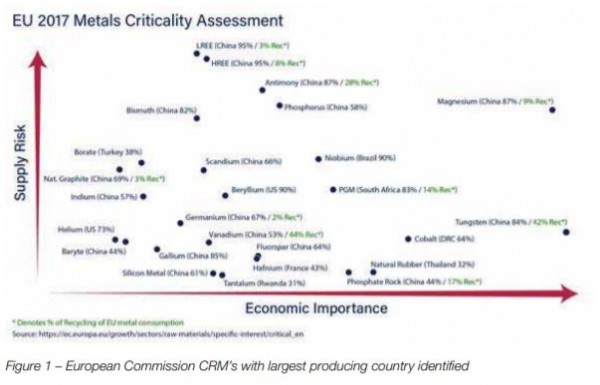 Where would a supply disruption leave us?

As can be seen in the chart above the label ‘critical’ goes hand in hand with a supply monopoly or duopoly. The result – many consuming countries are starting to recognise that metal dependency is a liability and that the security of their metal supply is important. Many are also realising that achieving metal supply security is an almost unobtainable goal for a number of reasons, including cost structures and skills requirements.

The policy maneuvering in the ongoing US-China trade war was highlighting this, the COVID-19 pandemic slammed the reality home – showing us what a supply shock could look like. This time the risks were made obvious with surgical masks and ventilators, which can be manufactured with short lead times – next time it could be the supply of critical metals for any number of reasons, and the development of these projects requires very long lead times and an economically viable deposit. The tide is going out and we have now had a glimpse of who is naked.

Why are we here

Policy is partly to blame for this situation - poor policy is a key contributing factor, driven by short termism and a failure to understand that economic security requires a broad-based economy with complete supply chains. Hollowing out of industries and the parallel loss of skills is the cost – the US now imports most of its rare earth requirements; Australia has always exported most of its metals in concentrate form – a common theme across many modern economies and the result of uncompelling policy settings and uncompetitive cost structures.

Many countries in Asia have limited mineral resources yet have the largest concentrations of industry - consider Japan, the Asian tigers, and China, and the scale of their industrial sectors. Companies like Lynas Corporation (ASX:LYC), Altech Chemicals (ASX:ATC) and Redflow (ASX:RFX) need to manufacture in South East Asia for cost reasons. This is essential to remain competitive and impacts all levels of the supply chain, including exploration and mining.

The policy shifts required to reverse the situation may happen overnight but the results will not be seen for years, even decades – why? As most explorers and developers will testify, to identify and develop a mineral resource is difficult, to produce a positive feasibility study based on realistic price assumptions is more difficult, to get into production is very difficult. This means that very few projects get past the feasibility stage and funded into production. This also means that those projects which have the potential to produce are quite valuable.

What does this mean for the resource sector?

As identified in Figure 1 above several countries all but control the CRMs. COVID-19 has ushered in a heightened awareness of CRMs, policy shifts should result in a greater focus on exploring for and developing CRM projects, and for ASX listed explorers this does not just mean in Australia – CRM security is not just about geography, it is about metal supply security - the opportunity is global.

Which metal is the most critical metal?

Tungsten is the most critical metal. Over 80% of the tungsten supply is controlled by China. The EU’s tungsten recycling rate of 42% is a strong indication of how important tungsten is as well as how important supply independence is – part of the EU’s CRM strategy is to increase recycling. There are over 30 listed companies globally representing over 40 tungsten projects, but that is only 40, many projects are remote, low grade or situated in high cost environments. Consider the failed and now delisted Wolf Minerals and its Hemerdon (Drakelands) Tungsten and Tin Project in England, which failed due to its low grade and high costs.

In a sense tungsten is the CRM canary in the coal mine - although there are plenty of tungsten projects in the pipeline most are remote, have low grades, or are situated in high cost environments. Remoteness, grade and cost often go hand in hand and amplify the CRM issue. This is the case for all critical metals and in essence this is why they are on the CRM/ list.

It is unlikely that any critical metals will drop off the CRM list any time soon.